It’s always good to take time to reflect on the past year before you look ahead to set your goals for the new one. Intueri looks back at the year that was and shares its analysis of the key events of 2018 that may have an enduring impact upon global value chains and shape the way forward in 2019. Look ahead by looking back.

The US and China Story: Global Giants at Odds 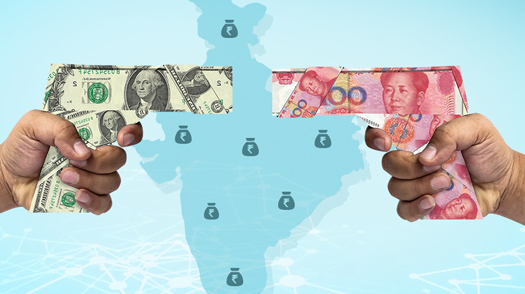 In retrospect, 2018 did appear to finally put paid to any lingering macroeconomic fragility ushered in by the Lehman Crisis, with the IMF setting its global economic growth forecast at approximately 3.7% for both 2018 & 2019 (in line with the 50-year average). This feeling seemed especially pronounced in the early stages with the then newly-instated Fed chief, Jerome Powell, expressing an unambiguous commitment to a bullish Fed rate hike cycle in synchrony with strong US earnings growth and historically low unemployment rates.

Closer home, the Monetary Policy Committee (under the aegis of the RBI) displayed an enduring commitment towards its inflation targeting framework by hiking India’s key policy rate twice in successive bi-monthly policy deliberations. However, tell-tales signs indicative of fault-lines in the global financial armory had become quite evident by the time the latter of these policy meets was held. For starters, trade tensions as a theme perpetuated throughout the year and climaxed with the US-China trade war reaching a melting point in the second half of 2018. The contingent impact on the global markets was especially heightened as this diplomatic “Armageddon” per se emerged close on the heels of Kim Jong-Un’s successive parleys with Donald Trump and Xi Jin-Ping. Back then, the apparent bonhomie shared by the leaders seemed to convey more sanguine prospects for a truce, thereby affecting a sharp reduction in macroeconomic volatility. The elaborating effects of the US-China trade war continue to loom on the global economy as negotiations are due to continue till the March 2 deadline.

Thus far, both the sides have lost billions of dollars in revenue, hitting sectors such as autos, technology, and agriculture, and crippling the global innovation ecosystem, in general.

The inversion of the US bond yield curve serves as the harbinger of a possible slow-down (if not a drastic recession) in the US economy.

Additionally, eco-political headwinds continued to bear their ugly head throughout the world. Brexit talks have been stalled time and again in the UK Parliament and several experts now even put the chances of Brexit happening at 50%. This has created several uncertainties about the UK’s precise socio-political standing in the global milieu with a strong shadow of ambiguity lurking over the repatriation of several jobs and global trade linkages.

At the moment, Argentina must bear with the triple whammy of a $ 50 billion IMF credit line, record high interest rates (60%), and a plunging currency. Propped by a US-initiated doubling of metal tariffs, the Turkish lira crisis, wherein the currency plunged 28% versus USD, set the country’s inflation rate soaring to a 15-year high of 25%. Popular journalist and raconteur, Jamal Khashoggi’s death does indicate that a politically-motivated stand-off between the US and Saudi Arabia seems to be in the offing as we head into 2019 with the US-led Iran sanctions serving as a ripe precursor.

As an aftermath, having roiled the financial markets in general, the contingent impact of these events on the commodity markets seems especially pronounced. Globally, oil prices peaked in mid-August with WTI crude oil spots flirting with the mid-70s per barrel. Oil prices have reverted ever since and have closed their divergence with other key macroeconomic indicators, following months of Trump-fuelled pressure to keep oil prices low. However, this relief seems to be short-lived and one can expect oil prices to skirt high levels yet again in mid-2019 with the Russia-OPEC cartel agreeing to cut production in a coordinated effort.

On the face of it, one might consider that these aforesaid macroeconomic headwinds (especially US-China trade dissonance) would augur well for India’s prospects as it could benefit from import substitution, in the short-run, and could emerge as the go-to manufacturing hub for big-ticket players by virtue of its skilled workforce and political neutrality, in the long-run. However, India has had more than its plate full in terms of the idiosyncratic uncertainties it had to deal with in the past year. The first half of the year witnessed the bad-debt crisis balloon to gigantic proportions with the Nirav Modi / Mehul Choksi drama engulfing the attention of not only India’s financial honchos but also its hoi polloi. This was followed by the IL&FS fiasco which laid bare several scathing deficiencies in the extant institutional risk management practices. While there were several major landmarks in India’s social fabric, headlined by the emergence of the #MeToo movement and the abolition of Section 377 of the Indian Constitution, the same can’t be said as far as its political stability goes. In May, the Karnataka assembly elections proved to be an inflexsion point for India’s political landscape with the post-poll Congress – JDS alliance overcoming anti-incumbency and the Modi wave to retain power in Karnataka. Thereafter, Congress’s recent electoral victories in Chhattisgarh, Madhya Pradesh & Rajasthan prove than the 2019 General Elections are far from a foregone conclusion. Given its prime position among emerging markets, India did exhibit more resilience initially to global risk-off scenarios and the Fed’s tightening cycle. Alas, it had to cave in eventually, due to the unforeseen volatility in crude oil prices, marked by unprecedented FII outflows from Indian equities and the USDINR depreciating to 74.71 in October. Amidst spiking inflation owing to higher oil prices, the credibility of India’s central bank (RBI) was called into question by several market pundits when it was indirectly forced to adhere to several of the ruling dispensations demands (inter alia a higher dividend and cheaper borrowing rates). The then governor, Urjit Patel’s shock exit right after has only aggravated the situation and has proved to be a major jolt to India’s domestic fundamentals.

Opportunity in Pursuit of Certainty

It would be prudent to note at this juncture that the picture isn’t as gloomy as it seems to be. India has for the first time been entrusted with taking the lead in hosting the 13th G-20 summit in 2022, thereby signalling India’s intend to enable its corporate houses to ink several bilateral/multi-lateral trade ties in the near future.  Further, the European Union has formally espoused India’s participation in starting joint connectivity projects, under its proposed 60 billion Euro plan that aims to provide options beyond China’s Belt and Road Initiative. The appointments of Shaktikanta Das and Krishnamurthy Subramanian, as the RBI Governor and the Chief Economic Advisor respectively, have managed to assuage the financial markets to a great extent and portfolio managers shall keep a close watch on RBI’s future policy on growth and economic stability.  Abetted by the Fed Chair’s over-effusive forward guidance on the rate trajectory (implicitly signalling a cessation of the rate hike cycle), the USDINR has stabilized ever since and the pair has reached sub-70 levels after quite a while. The projected slowdown in the US economy as indicated by the inverting bond-yield curve also could be an opportunity in disguise for emerging markets and India in particular.

Given these precepts, 2019 shall prove to be an interesting time for Indian corporate where they can hope to gain windfall business prospects by virtue of strategic positioning and agile execution.