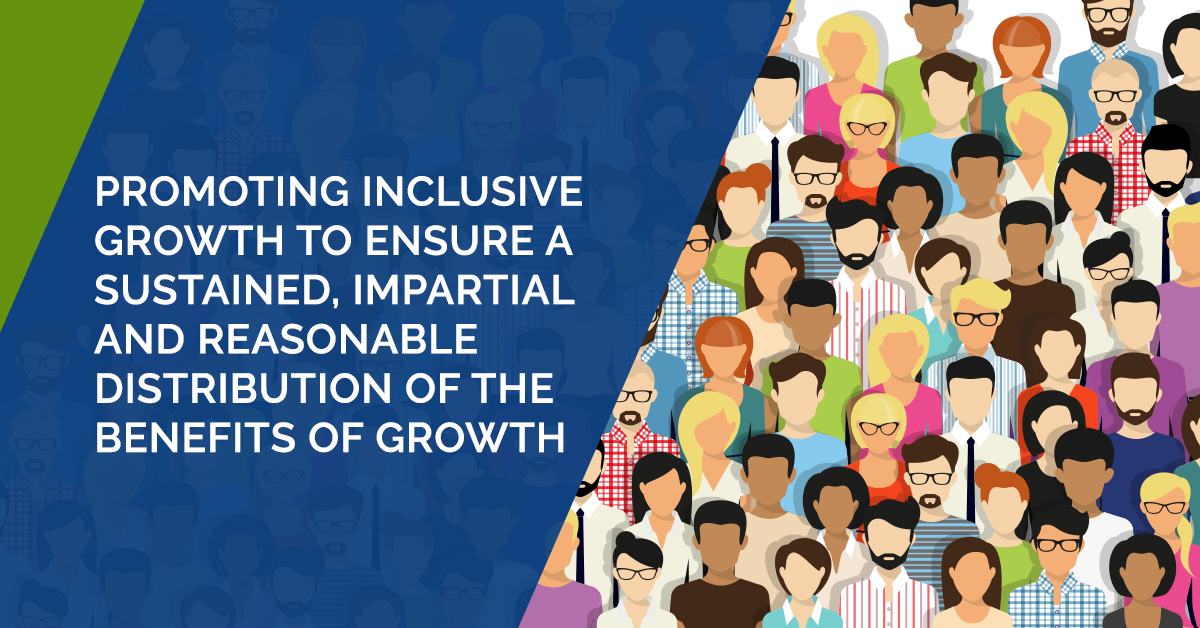 Absolute poverty has fallen substantially over the last couple of years, with most of this decline contributing positively to rapid economic growth in developing countries. However, the acknowledgment that economic growth often does not meet the needs of the poor has encouraged the current discussion on the need for inclusive growth. Economic growth in the absence of measures to ensure the sustained impartial and reasonable distribution of the benefits of growth has frequently disseminated the concentration of wealth in the hands of those already better off. As a consequence, Governments and donors in many developing countries have come to comprehend that in order to considerably reduce poverty they must promote inclusive growth. A commonly used definition, employed by the World Bank, which defines inclusive growth as an absolute reduction in poverty associated with the creation of productive employment rather than direct income redistribution schemes. The World Bank maintains that inclusive growth should take into account both ‘the pace and pattern of growth’; these are considered to be linked and should therefore be addressed together.

Defining inclusive growth, rapid pace of economic growth is necessary for substantial poverty reduction and for the growth to be sustainable in the long run, it must be broad based across sectors and inclusive of large part of a country’s labour force.

Promoting inclusive growth requires policymakers to address both growth and income distribution, so it requires an understanding of the relationships between growth, poverty and inequality. Economic growth is a prerequisite for poverty reduction when income distribution is held constant. The acknowledgment that inequality affects the impact of growth on poverty reduction has led to a broad agreement that it is necessary to look beyond a ‘growth-first’ agenda in order to successfully deliver inclusive growth.

A robust inclusive growth strategy will complement policies to stimulate economic growth with those that foster equality of opportunity, alongside a social security net to protect the most vulnerable. As such, economic policies to promote structural transformation and create productive employment for poor people will need to be complemented by investments in human capital and other programmes to support social inclusion and equal access to jobs.

Countries have committed themselves to time-bound targets of prosperity, people, planet, peace, partnership (five P’s) keeping in line with the United Nations 2030 agenda and the Sustainable Development Goals. The Paris Agreement, which is part of the SDG framework, requires every country to achieve net zero greenhouse gas emissions by mid-century (Masson-Delmotte et al. 2018). In order to achieve results in SDG, policy frameworks adopted by the Governments play a crucial role. The three principle layers to measure government efforts to implement the long-term objectives of the 2030 Agenda and the Paris Agreement:

The SDG index summaries countries’ current performance and trends on the 17 SDGs.India ranks 115 in 2019.

In the context of India’s inclusive growth trajectory, the strategies of Inclusive growth and development came into the attention in the progressing policies of emerging market economies (EMEs) with higher economic growth rates. With an accelerated economic growth rate, Indian policy makers too moved their concentration on Inclusive growth and expansion while formulating the 12th five-year plan.Thus, the plan targeted deprived sections of the Indian population, health, employment, rural urban infrastructure, women and child development and social security measures against the backdrop of the strategy.

From a peak of 8.1% in the fourth quarter of 2017-18, growth in gross domestic product (GDP) has now decelerated to a six-year low of 5% in the fiscal first quarter, with a slowdown visible across all sectors. Particularly important in this context is the compression of government expenditure, Central government revenue grown only 6% last year, more than 11% short of the budget estimate. Accordingly, expenditure growth was compressed to 6.9% last year, down from more than 11% the year before. Weak revenue growth meant devolution to states also fell short, forcing them to cut expenditure. This compression of government spending at a time when all major components of aggregate demand were already slowing has been an important driver of the sharp decline in economic growth. The country is now requiring an inclusive macroeconomic strategy to revive aggregate demand in the short run, while initiating structural reforms to sustain growth over the long-term. For inclusive growth in India macroeconomic activities, initiated and supported by the government, should be planned to uplift the standard of living of common people and must not be concentrated only to increase the pace of the growth process.

In this regard, while assessing India’s progress on SDG, we note that India submitted the VNR in 2017 and is due in 2020 again. According to VNR 2017 developed by NITI Aayog, Government of India is strongly committed to Agenda 2030, including the SDG.

The Index tracks the progress of all the States and UTs on a set of 62 Priority Indicators, measuring their progress on the outcomes of the interventions and schemes of the Government of India. The SDG India Index is intended to provide a holistic view on the social, economic and environmental status of the country and its States and UTs. A composite score was computed for each State and UT of India based on their aggregate performance across 13 of the 17 SDGs. The SDG Index Score for Sustainable Development Goals 2030 ranges between 42 and 69 for States and between 57 and 68 for UTs. Among the States, Kerala and Himachal Pradesh are the front runners with an SDG India Index score of 69. Among the UTs, Chandigarh is a front runner with a score of 68.

In the context of the above interpretation of the term, sustained inclusive growth in India possibly requires changes in prevailing growth approach and a definite line of deed to include the excluded representatives. After pursuing the current growth strategy for a long time, economic inequality in India is still very severe. 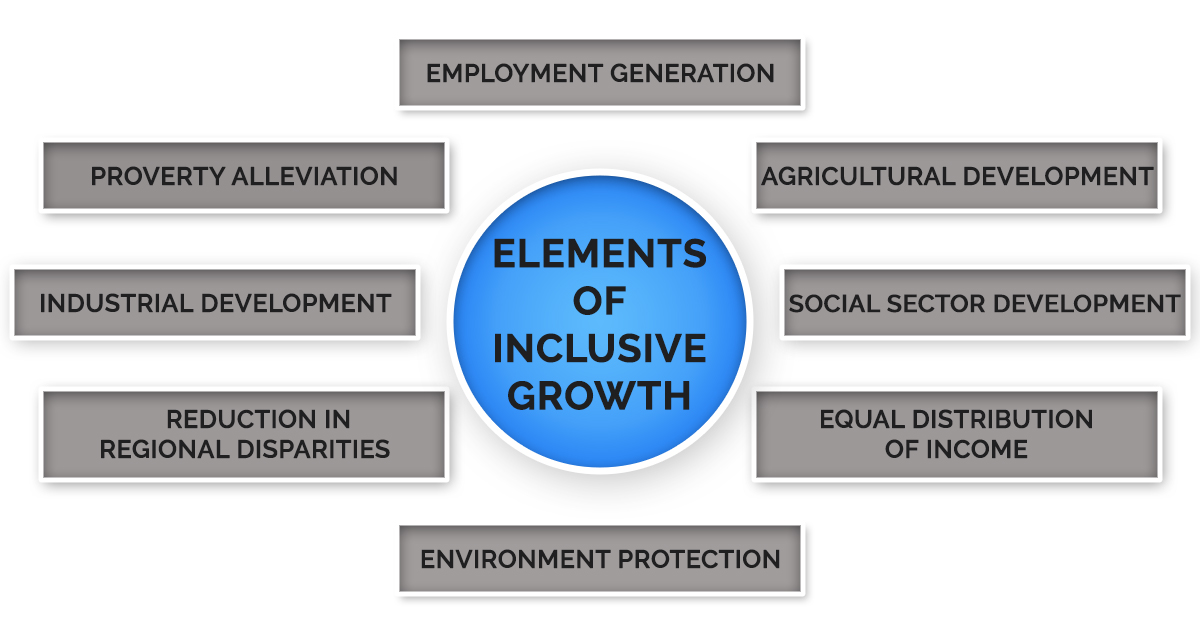 Since globalization, significant improvement in India’s economic and social development made the nation to grow strongly in the 21st century. The following factors encouraged India to concentrate more on inclusive growth: 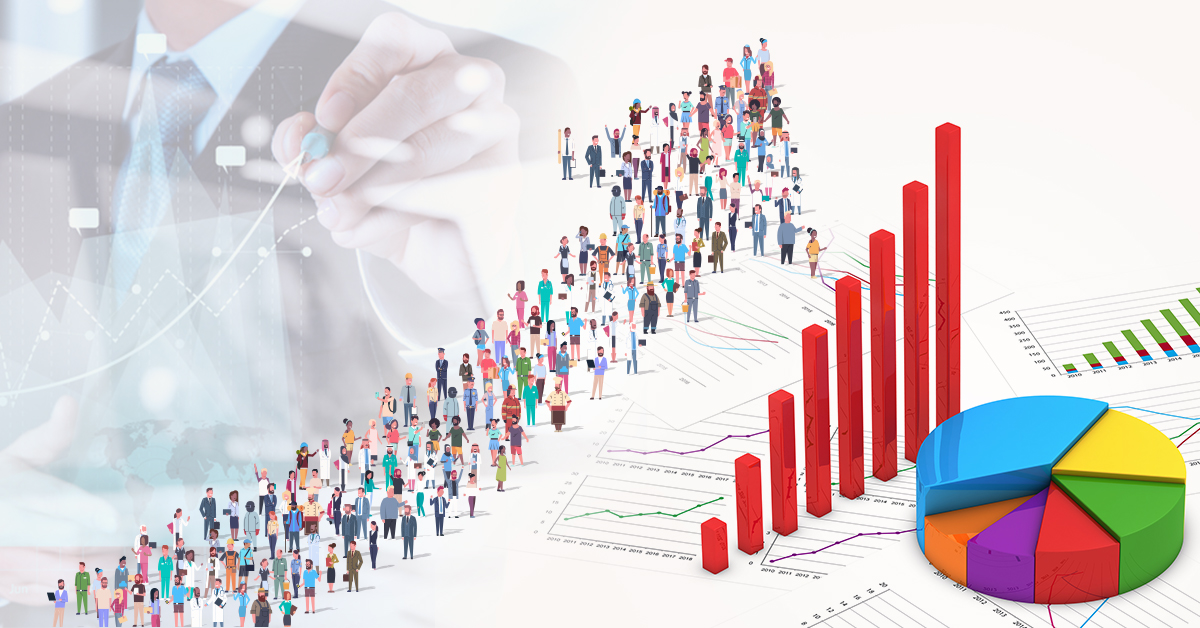 In the context of the above findings about income disparities and economic inequality in India, it appears that certain fundamental changes are to be initiated in the growth strategy to adequately enhance productive employment opportunities for the economically weaker sections of people. Accessing opportunity in the growth process by the hitherto excluded poor, low-income and the unemployed is to be ensured for any meaningful implementation of inclusive growth in India.

Extension of irrigation facility in India is one area which needs instantaneous attention in the interest of inclusive growth in the country. Conservative estimates show that nearly 60% of India’s arable land is rain dependent. It means only 40% of agricultural land is fully under all-season irrigation facility. Another estimate shows that yearly average rainfall in India is 3 lakh cubic feet and only one third of that is retained in the country and two lakh cubic feet drains down to sea. It implies that without distressing the ground water level and just by using a considerable part of the unutilized rainfall, irrigation capacity can be extended immensely. Hence, adequate investments to quickly extend the spread of minor/major labour-intensive irrigation projects will not only improve land yield but also provide access route of the previously excluded agents to enter the growth process. Certainly, there are hurdles for jumpstart extension of irrigation facility; but the hurdles should not be impossible in the interest of common people of India.

Secondly, everybody agrees that in the present global economic scenario, educated workers are more productive than illiterate labours. However, according to Census Data of India nearly 26% Indians were not literate at all in 2011 which is far below world average. Hence, erasing illiteracy and massive expansion of primary and technical education can enhance labour productivity and gainful employment opportunity of the excluded agents in the current growth process.

Thirdly, In India 70% of health-related expenditure is made by individuals and only 30% is spent by the government – just the opposite scenario of many countries. It is also estimated that only due to increasing medical expenditure 38 million Indians are joining below-poverty-line population every year. Hence for a meaningful inclusive growth and poverty reduction, massive extension of affordable healthcare, control of drug prices, free availability of drinking water and sanitation facilities are to be ensured.

Thus, the key implications from the above discussed concept of inclusive growth would essentially include ensuring fiscal health of India with ever increasing role of government in the economic sphere, effective use of resources and increasing devolution and decentralisation, strengthening competitive pressures, transforming workforce structure, size, and human resource management arrangements, changing budget practices and procedures, and introducing results-oriented approaches to budgeting and management thereby enhancing efficiency of public sector to achieve sustainable development goals. With an improved go-to-policy response of the Government, a conducive environment with a well-functioning financial structure provided by the government can help other relevant stakeholders and achieve broad based impacts on the economy.

Today, Indian companies too are mapping their business actions to SDGs. Broadly, companies focus on SDG 4 (quality education), SDG 8 (decent work), SDG 5 (gender equality), SDG 13 (climate action), SDG 6 (clean water and sanitation). Existing programmes of companies are also being linked to SDG while some are linking to their branding efforts. Essentially, the SDGs have the potential to provide a framework for mobilizing corporates to invest in sustainable development in an ongoing and scalable way while keeping their business interests intact. The SDG serves guidelines for businesses to assess and manage social, economic and environmental risk, while contributing to bettering their reputation, image and their strategic position in the world’s markets.

As inclusive growth is considered as a prime focus by the Government, policy reforms in this respect have a critical yet broad-based impact on industries and market. All players in the system are affected in a certain matter depending on nature of its business. In today’s scenario, amidst all the global happenings we pause to look at the domestic prevalent factors from a fiscal angle that drive businesses and contribute to markets and economy at large.