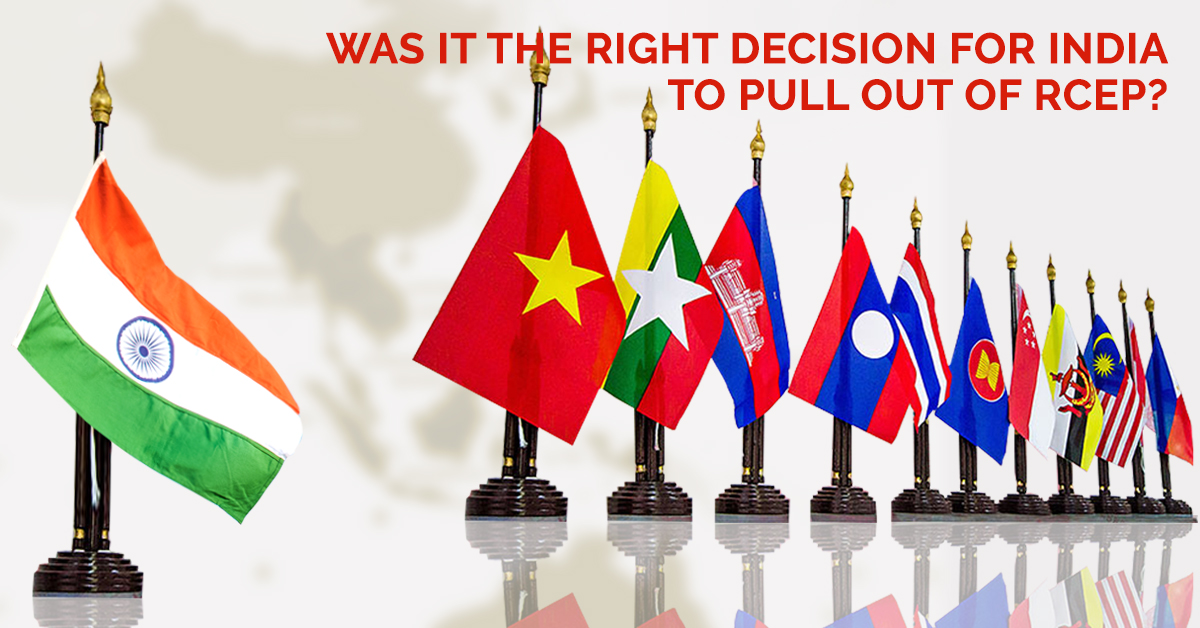 A reluctant participant in the dragged out RCEP negotiations that began in 2012, India gradually warmed up to the idea of greater economic integration to move up the global value chain. Although protectionist forces opposed the RCEP since its inception, liberal advocates of laissez-faire pushed for the free trade agreement.

The Regional Comprehensive Economic Partnership (RCEP) is a free trade agreement originally devised to consist of 16 countries across the Asia-Pacific region. At the RCEP’s administrative core is ASEAN: an intergovernmental grouping of 10 Southeast Asian countries – Brunei, Cambodia, Indonesia, Laos, Malaysia, Myanmar, Philippines, Singapore, Thailand, and Vietnam. It was proposed that the ASEAN bloc will be joined with six member-states: China, Japan, India, South Korea, Australia and New Zealand.

While the RCEP is administratively built around ASEAN, the main mover is China. The world’s largest trading bloc was pushed by Beijing starting 2012 to counter a free trade agreement that was in the works at that time: theTrans-Pacific Partnership. The US-led Trans-Pacific Partnership excluded China and hence the RCEP was Beijing’s balancing act. The Chinese government inculcated ways to expand its market through this regional trading bloc. For example, there is no coconut cultivation in China, but the Chinese import them from other countries and then process and export. 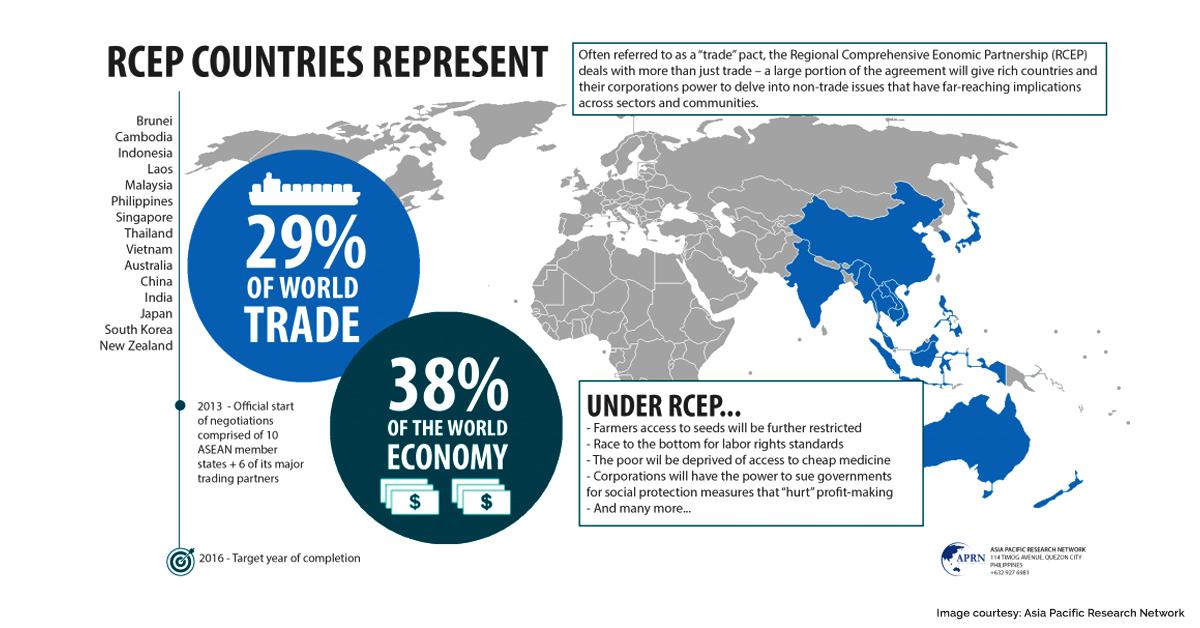 Indian diplomat, counsels, farmers and politicians dissented from joining the RCEP. Trade deficit, unemployment, decrease of domestic produce in the country, anti-dumping measures are a few reasons for this opposition.

Areas of disagreement with the RCEP member-states: Why India opted out

1. Base Year: There is a disagreement between India and the RCEP members on fixing the base year. The base year is the first of a series of years in an economic or financial index. For example, to find the rate of inflation between 2013 and 2018, 2013 is the base year or the first year in the time set. The base year can also describe the starting point from a point of growth. India opposed to the proposal that 2013 be treated as the base year for reducing tariffs, effectively implying that member countries should slash import duties on products to the level that existed in 2013. India is pushing for 2019 as the base year, given that import duty on many products such as textiles and electronic products has gone up in the last six years.

2. Rules of Origin: Rules of origin are the criteria needed to determine the national source of a product. Their importance is derived from the fact that duties and restrictions in several cases depend upon the source of imports. As per RCEP, China and Korea may be using countries like Indonesia and Thailand as “proxy” countries from where, the good which is actually originating in China or Korea, will be imported to India. Countries like Indonesia and Thailand are getting involved in the Chinese and Korean markets by staging that they qualify as the Minimum Value-Addition Criteria as Assembly Plants, from where the export to international markets will take place. Hence, such an act may lead to India becoming a dumping ground.

3.Trade Deficit: India registered a trade deficit in 2018-19 with as many as 11 RCEP member countries. China is India’s largest trading partner while we are China’s 11th largest trading partner India had a trade deficit of $104 billion with RCEP countries. More than half of this was with China at $53 billion. This raised worries about India being flooded with Chinese goods once the RCEP deal takes effect.

5.Import Tariff imposed on countries: India wants exemptions built into the ratchet obligations as part of the pact. A ratchet obligation implies that a member country cannot be raising tariffs once the pact comes into effect. An exemption would imply that a country will be able to erect restrictive measures later on grounds of protecting the national interest. Under RCEP, India would have been required to eliminate tariffs on 74% of goods from China, Australia, and New Zealand, and 90% of goods from Japan, South Korea, and ASEAN. Amidst an economic slowdown, India faced the risk of becoming a dumping ground for foreign goods.

6.Protection of domestic data: There is also the issue of data localisation under the RCEP deal. India wants all countries to have the right to protect data. This would imply that countries can share data only where it is “necessary to achieve a legitimate public policy objective” or “necessary in the country’s opinion, for the protection of its essential security interests or national interests”.

7.Impact on specific products: Natural rubber, cardamom, tea and coffee, spices, rubber, coconut and oilseeds, milk, groundnut, oil palm, mustard, sunflower, soybean will be affected adversely. The idea is to understand that if the import of such products increases in the market, rural India gets hit.The RCEP would allow the dairy industry of Australia and New Zealand to compete with our resource-strapped farmers.

IMPACT OF RCEP ON INDIAN FARMERS

India’s farmers were worriedthat they would be unable to compete on a global scale.For example,the milk industry is a huge source of income for crores of farmers and they will be unable to face off against the highly developed dairy industry of New Zealand and Australia.Both these countries are eyeing the huge market in India.

It is notable that New Zealand exports 93.4 percent of its milk powder, 94.5 percent of its butter and 83.6 percent of its cheese production. Removal of tariffs, which at present are 60 percent for milk powder and 40 percent for fats, will allow the dumping of these products.  The presence of China, Australia, New Zealand, and Japan in RCEP will also affect sericulture, horticulture as well as floriculture in India. The farmers are also fearing that the RCEP might allow cheap imports of palm oil from Malaysia and Indonesia and rubber, tea, cardamom and vanilla from other Southeast Asian countries.

Some of the Indian sectors effected by the RCEP are listed in this article:

1.Dairy: Farmer group representatives said that dairy cooperatives in India earn about Rs 280 to Rs 300 a kilogram of milk powder. They are worried that milk powder from Australia or New Zealand might become available at Rs 180 to Rs 200 a kilogram.

2.Spice: The India-Sri Lanka FTA’s impact was high on spice farmers. Pepper started coming from Vietnam through Sri Lanka. In 1999, the price of pepper was 720 per kg, which has now reduced to 330 per kg. Today, Lankan nutmeg, pepper and other spices are still coming to India and impacting our farmers.

3.Coffee: The price of raw coffee beans was Rs 63 per kg in December 1999. This got reduced to Rs 18 per kg in 2004. Hindustan Lever and Tata, both processing companies of processed tea and coffee, were the beneficiaries, while farmers were biggest losers. Tata transferred their plantation asset to some other company, because they could now import tea from outside and sell it India. 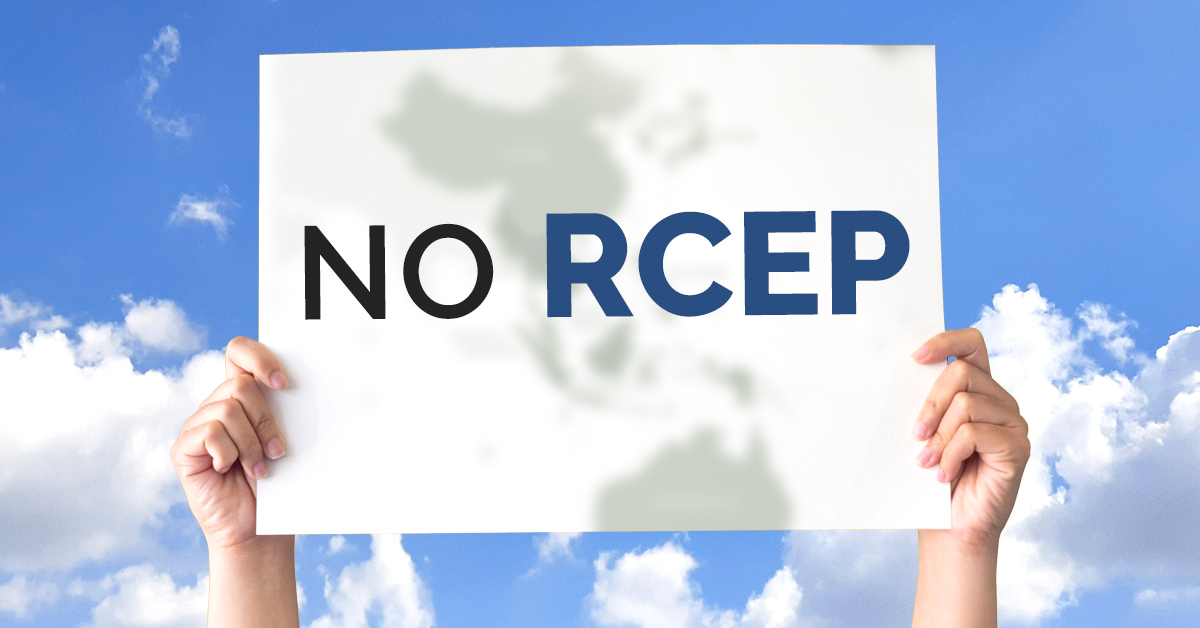 4.Fisheries: Another sector coming under threat is fisheries. Some of the countries are interested to open up the sea for Deep Sea Fishing (DSF) vessels. When the new DSF vessels enter the Indian Exclusive Economic Zones (EEC), they will go dry in a short span of time. If huge vessels operate in our fragile fisheries zone, our fishing resources will be exhausted within no time. This will displace 7.5 million fisherfolk.

5.Sugar: Farmer agitations are going on in most of the sugar producing states. Nowhere are farmers getting the due MSP. Sugar factory owners complain that retail prices of sugar have come down to Rs 40-42 per kg. This is due to import of sugar. Even though we increased import duty to 100 per cent, import is increasing, and export is decreasing.

6.Wheat: Wheat production provides livelihood to more than 6.7 crore Indians. There were bulk imports on account of the Indian government and the private sector manufacturers of bread, biscuits and noodles. These lead to a price crash of Rs 2.65 in the market.

WAS OPTING OUT OF RCEP THE CORRECT DECISION?

However, many corporates and economists still believe that India’s manufacturing industry needs the pressure of external competition to secure global competitiveness it lacks.Without access to trading blocs, Indian industry would be limited to the home market, denying the growth of international expansion.It was being argued that the RCEP would facilitate India’s Micro, Small and Medium Enterprises (MSMEs) to effectively integrate into the regional value and supply chains. Moreover, RCEP can bring reforms in business competitiveness and policy reforms for India from these nations.

The exports category of T-shirts and singlets demonstrates how staying out of trade pacts is not sustainable. The US, a key market for India, imposes 32% tariff rate on India’s exports in this category, but nothing on exports from South Korea, as it enjoys zero tariffs under the US-Korea FTA. South Korea, a key competitor of Indian apparel exports, also enjoys zero tariffs under the EU-Korea FTA. 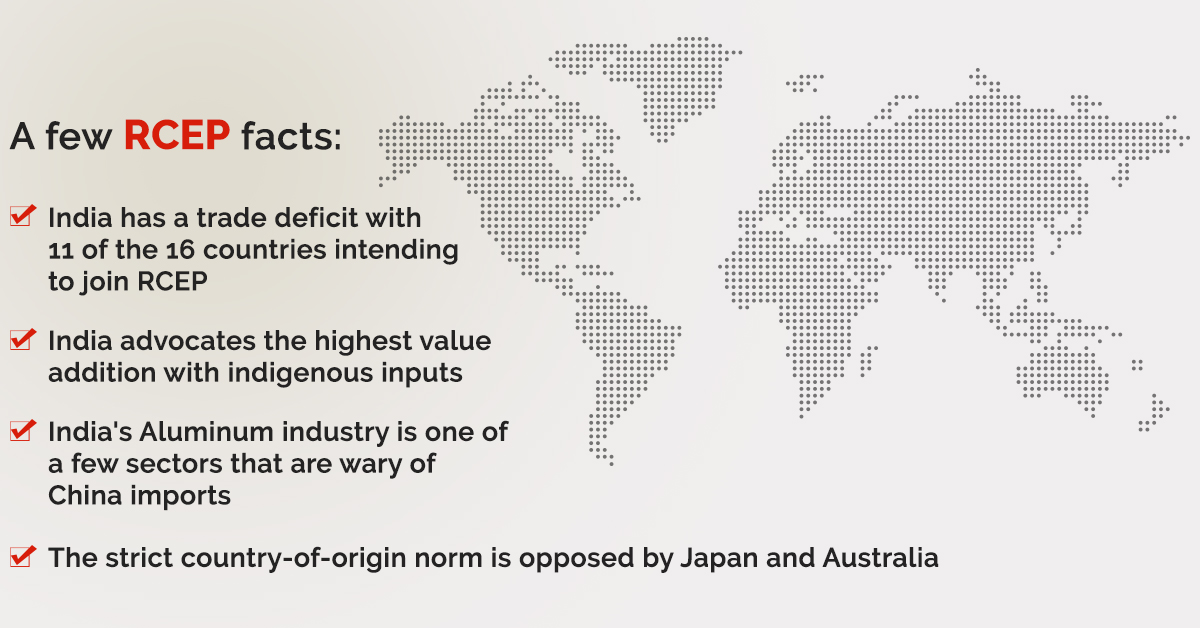 As per the Ease-Of-Doing-Business Index, except for Cambodia, Laos, and Philippines, all other RCEP nations rank higher than India, and hence can boast of better business conditions for attracting investments.

As India has now opined to step out of RCEP, foremost alternative is to engage with the RCEP nations bilaterally. In no circumstances, should India give out any impression that we are withdrawing from one of the most dynamic regions of the world.India has an existing trade agreement with the ASEAN and bilaterally with Singapore, Malaysia, Thailand, Indonesia,Japan, and South Korea. Clearly, the inclusion of India in the RCEP could have given more market access to the rest of the three countries namely, China, Australia, and New Zealand.

It is equally important is to see how Indian institutions are meeting with global commitments that have geo-strategic and geo-political implications. If India wants to arrive at a solution for RCEP soon much more diplomatic efforts are required with the RCEP nations.Production and post-production competitiveness of Indian products must be boosted to promote exports, which remain critical to maintain a favourable balance of payment situation and create jobs.

If Indian grassroots are marred, domestic surplus is fed to cattle and unemployment moves up because of such FTAs, then what is the purpose of advancing in global trade? By implanting innovative solutions, there are various ways of positioning domestic produce in global value chains. The focus of the Indian economy needs to be on how surplus from the farmers can reach places which are unfed, and national value chains. This will help us achieve optimum allocation of resources. Filing intellectual property rights on domestic produce will protect and help in international market expansion. As the seedling of commerce is growth of revenue, India should focus onexport-oriented strategies than reducing tariff barriers on imports and improve FTAs with RCEP nations.