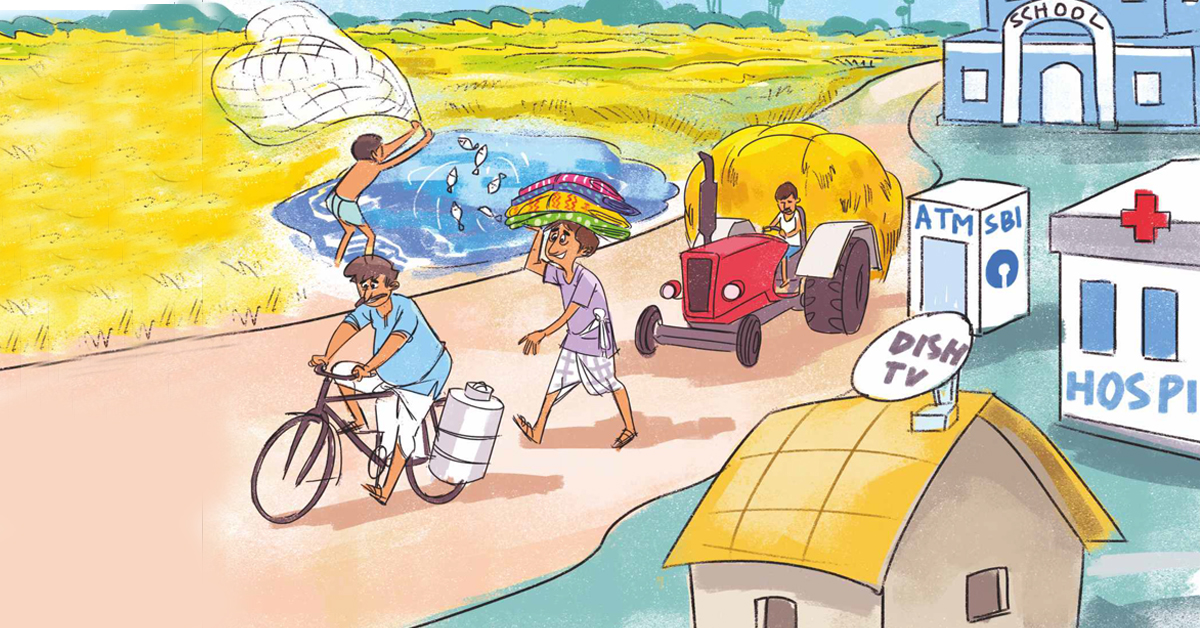 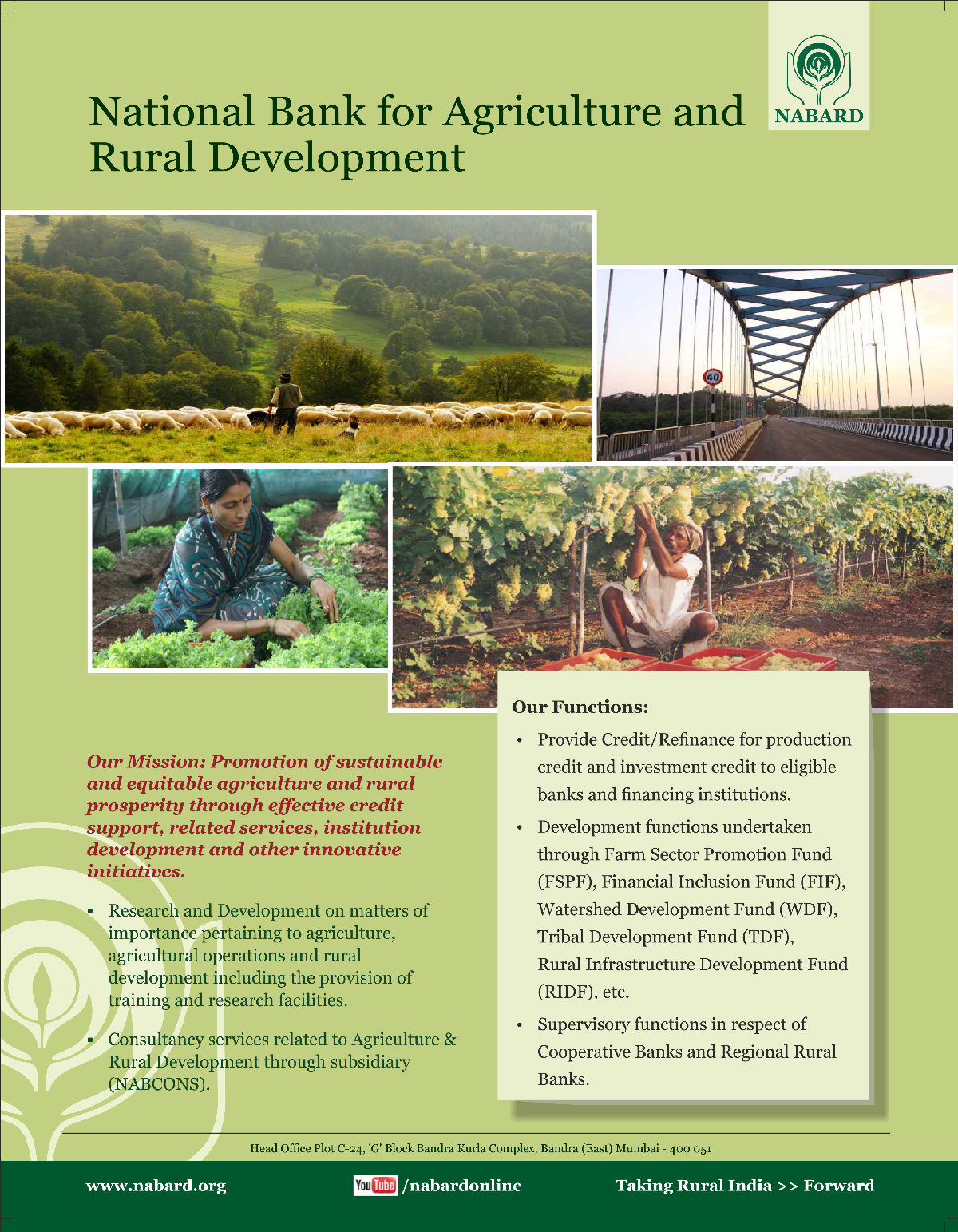 India is the world’s second largest agrarian economy accounting for 7.4% of total global agricultural output. It is also the world’s 3rd largest producer of food. A bumper harvest of winter crops and higher production in livestock and fisheries sectors aided a 5.3% growth in agriculture GDP in the first quarter of 2018-19, up from 3% in the same period last year. Production of rice, wheat, coarse cereals and pulses registered growth rates of 15%, 1.2%, 15.6% and 17.3%, respectively, during the Rabi or winter season in the agricultural crop year of 2018-19. About 45% of the gross value added or GVA in the agriculture sector was contributed by livestock, forestry and fisheries, which registered a combined growth rate of 8.1% in the first quarter of 2018-19. Agriculture GDP grew at 3.4% in 2017-18, lower than 6.3% in the previous year.

Rural transformation-an essential part of structural transformation-entails greater interaction along the rural-urban spaces, thereby promoting agricultural productivity and greater marketable surpluses. Over time, from predominance of farm sector, non-farm activities have gained importance. Alongside, with agriculture being commercialized, a large share of the country expected to be urban by 2050. Declining contribution of agriculture to the national income from 18.2% in 2014-15 to 16.5% in 2019-20, reflecting
the development process and the structural transformation taking place in the economy. This further has given rise to growth of agricultural allied sectors, non-farm activities and even self-employment opportunities and rural tourism. 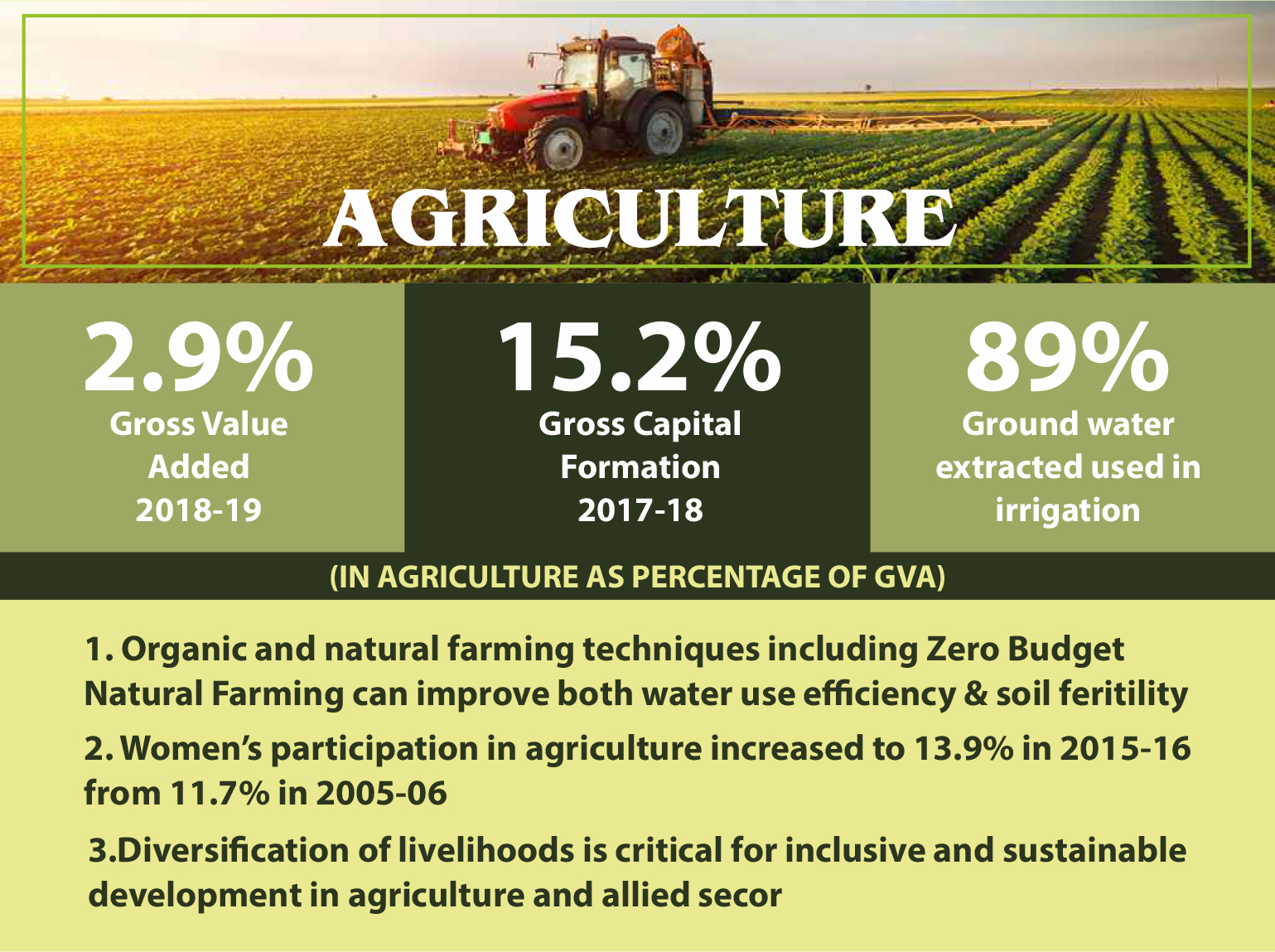 As part of allied sectors-Animal Husbandry, Dairying andFisheries activities, along with agriculture,continue to be an integral part of human life.Livestock income has become an important secondary source of income for millions of rural families and has assumed an important role in achieving the goal of doubling farmers’ income. Livestock sector has grown at a compound annual growth rate of 7.9 per cent during last five years.

Milk Production and its growth rate is depicted below: 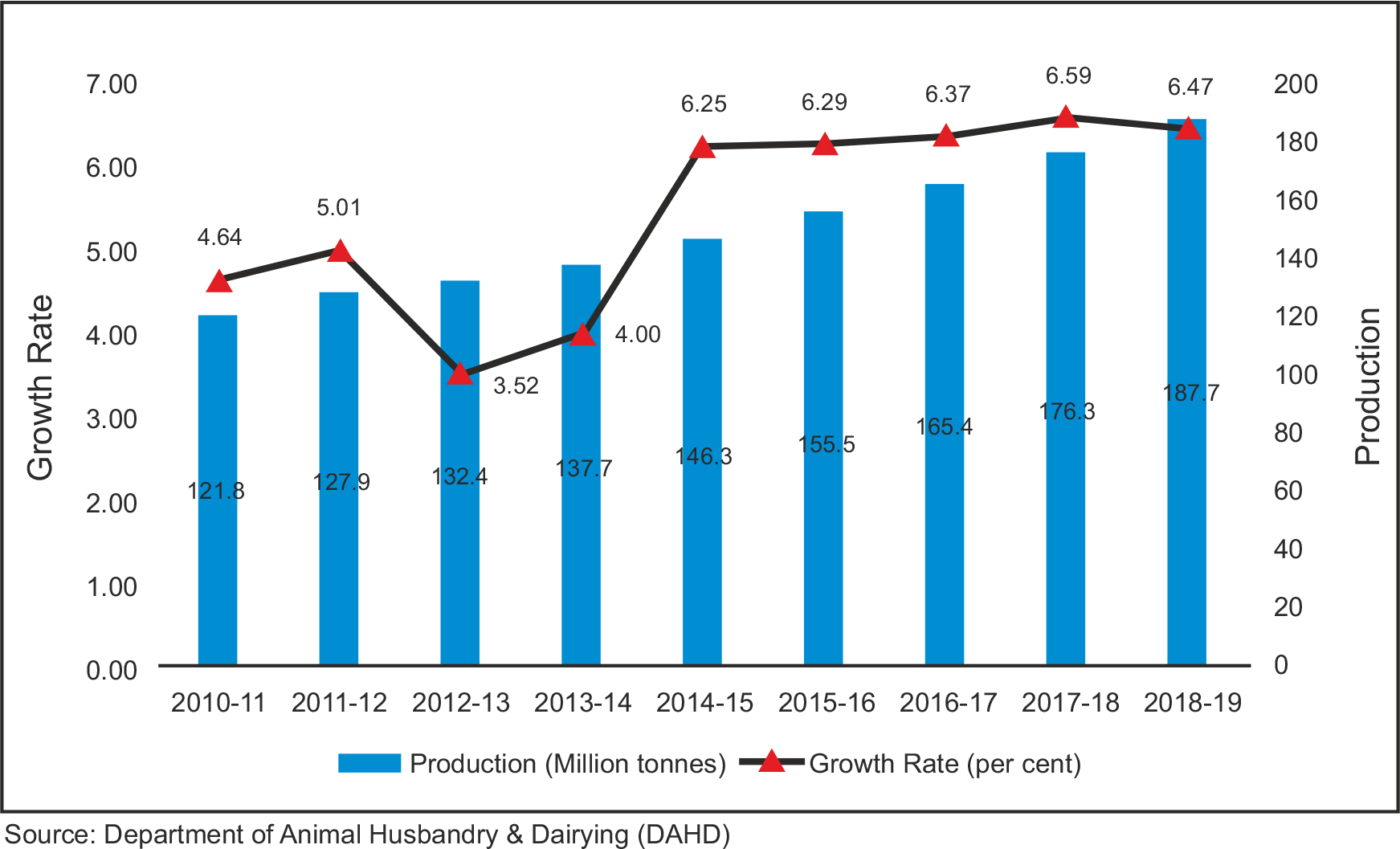 Fisheries, another important source of food, nutrition, employment and income in India. The sector provides livelihood to about 16 million fishers and fish farmers at the primary level and almost twice the number along the value chain.The sector has been showing a steady growth in the total GVA and accounts for 6.58 per cent of GDP from agriculture, forestry and fishing. The fish production in India has registered an average annual growth rate of more than 7 per cent in the recent years. The sector has been one of the major
contributors of foreign exchange earnings with India being one of the leading seafood exporting nations in the world.The total fish production in the country stood at 13.42 million metric tonnes (provisional) during 2018-19. Of this, the marine fisheries contributed 3.71 million metric tonnes and the inland fisheries
contributed 9.71 million metric tonnes.

Fish Production over the last five years for Major Producing States (in ‘000 Tonnes) is depicted below. West Bengal is the second highest in fish production after Andhra Pradesh. 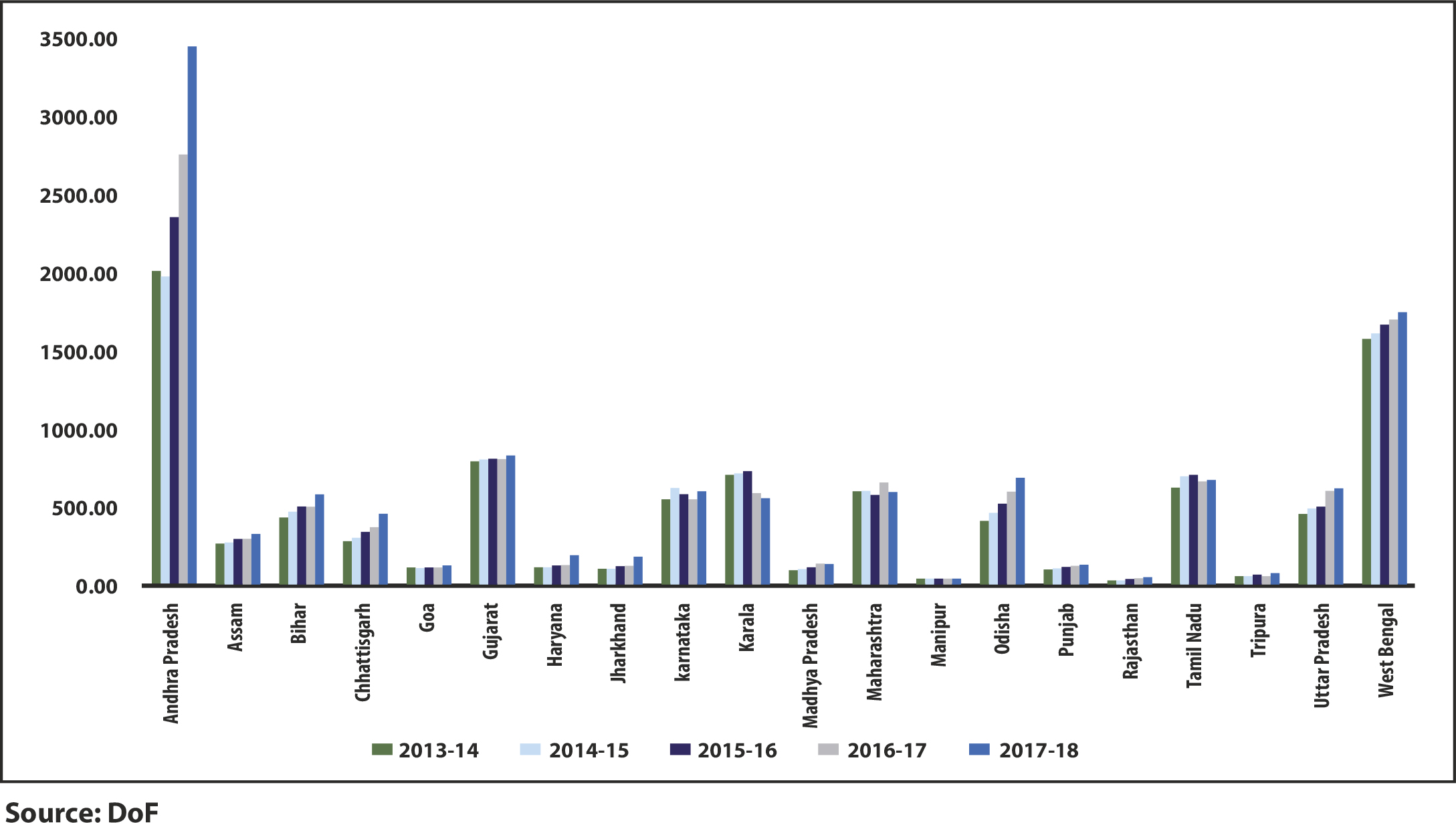 With this natural process of development in shifting activities to non-farm in rural India, it is crucial to take note of the thrust areas which have emerged as newer sources of income, employment, alleviating poverty and thus creating sustainable living.

The Rural Non-Farm Sector (RNFS) encompasses all non-agriculture activities: mining and quarrying, household and non-household manufacturing, processing, weaving, artisans, craftsmen, etc.As per the tenth agricultural census, the average size of agriculture landholding declined to 1.08 hectare in 2015-16 from 1.15 hectare in 2010-11. This explains the rise of employment in non-farm sector. It is observed that 64% of rural employment is in the agriculture sector, while the share of agriculture in rural output is 39%.
Hence, reducing the dependence of rural masses on agriculture as a source of income will help improve the overall income of the rural population.

Another identified means of rural livelihood generation and sustainable living is through Self Help Groups and Self Employment. The National Bank for Agriculture and Rural Development’s (NABARD) Development Policy Department defines Self Help Group (SHG) as-“Voluntary organization of people operating within a frame work of rules and regulations for common economic and social objectives with an approach of participatory decision-making and sharing of benefits in an equitable manner”.

SHGs may be registered or unregistered groups of micro entrepreneurs, preferably having homogenous social and economic background, who choose to come together to mutually support each other and find ways to improve their living conditions.

1. In the initial stages, capital investment restrictions were imposed to protect the small-scale sector, from predation by large industry.

2. Reservation of products for the sector was initiated to create a domestic market and quantities restrictions imposed to protect them from competition from imports.

3. Capital investment limits have discouraged economies of scale, and concessions offered to small industry have created adverse incentives against re-investment. Reservation of products for the small-scale sector has gradually reduced in significance.

4. The decision of the government to put all the reserved items in the open general license category from April 2005 meant free import of such items at the prevailing tariff rate.

5. With the latter slated to come down over time to around 20 per cent as per the WTO norms, this will effectively signal the end of protection for the small-scale industry. 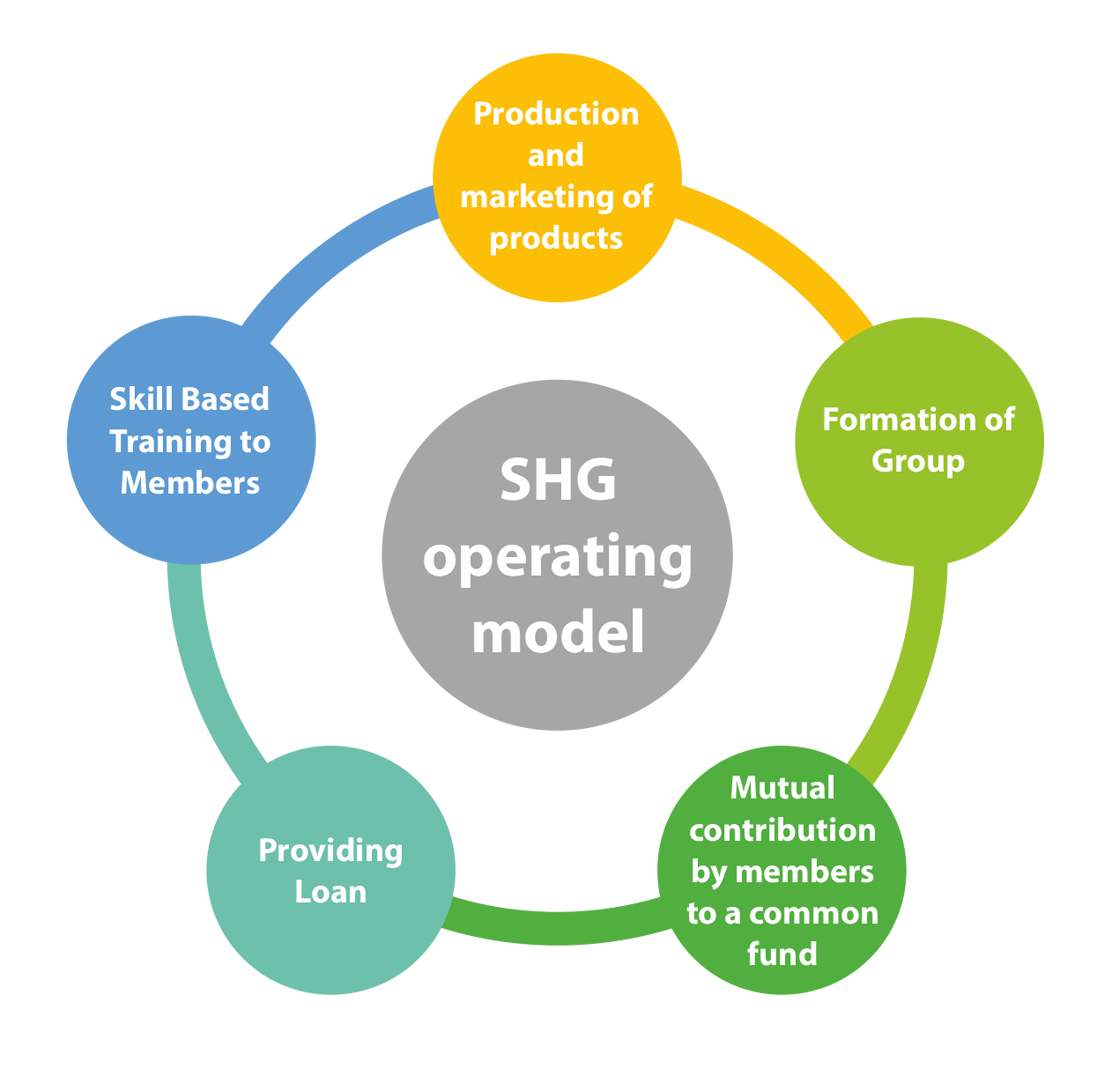 Specific to SHGs, the Central Government has support initiatives such as:

Thus, the SHGs play a key role towards livelihood generationand thereby facilitates eradication of rural as well as urban poverty. One of the major reasons for rural poverty in our country is low access to credit and financial services. The SHGs enable poverty alleviation by providing financial support to the members through micro credit.

West Bengal is a predominantly agrarian state withagriculture contributing 18.8% to the state’s GSDP in2014-15.As the rural economy of West Bengal is very vibrant comprising of 2.7 percent of India’s geographical area but supporting nearly 8 percent of its population,it has resulted in high population
density and a low average landholding size (0.77 Ha per household). Among an estimated 71.23 lakh rural households, 96 percent are small and marginal farmers.Increasing population pressure with a low percapita landholding base has resulted in diversification of earning activities outside the farm sector.

Allied sectors such as animal husbandry, fisheries, food process and horticulture and SHGs and SEs have been growing rapidly. The significance of the livestock sector in the economy of our State can be attributed from its contribution of 4.41% to the total SDP and 18.6% of the agricultural SDP. It is pertinent to highlight that employment opportunities in traditional agriculture sector are shrinking rapidly and there is virtually no scope for employment of rural unskilled youths in capital intensive industrial units. On the other hand,
demands for milk, meat, egg & other livestock related products are growing exponentially due to population explosion, high GDP growth, growing urbanization and change in the food habits of the middle & upper strata of the society. Animal Husbandry and Dairy sectors therefore have the seminal potential to open up new vistas for large scale employment generation.

Similarly, West Bengal is endowed with fishery resources, water bodies and most congenial aqua climate for fish farming making the fisheries sector one of the crucial industries of the State. 40% of water bodies (brackish waters) in West Bengal are used for cultivation of shrimps majorly Vannemei type of shrimps.The annual estimated fish production in the State in 2015-16 was at 16.71 lakh ton as compared to 14.72 lakh ton during 2011-12 (registering a growth of 13.5%). Shrimp production in 2015-16 has been 1.18 lakh ton compared to 1.06 lakh ton in 2011-12. West Bengal contributes around 21-23% to India’s fish production. 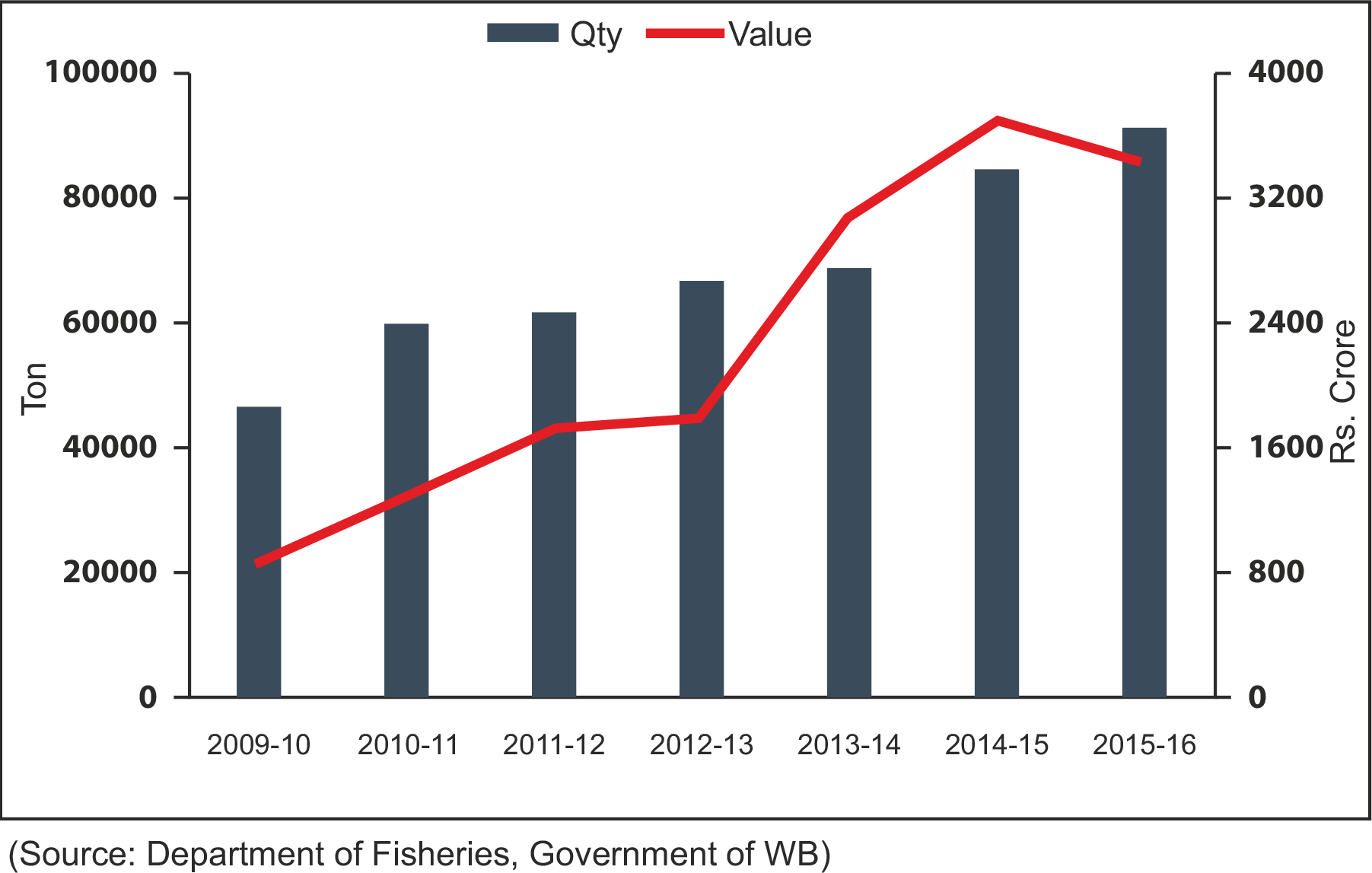 Agro and food processing industries form a very important part of the state’s economy. The West Bengal government is setting up a number of policies and plans to focus on the selected areas like vegetables, fruits, fisheries, rice, poultry, dairy and floriculture.entrepreneurship for processing of fruits, vegetables & horticulture items etc. The State Govt. is encouraging the farmers for mechanization through the use of modern agriculture implements and machines form timely farm operation and reduction in the cost of production.

In the state, the main processed products in the Fruits and vegetables category are jams, jellies, pickles, sauce, canned sliced fruits and squash. Agro Food parks are being developed in the state with the intention of providing support to small & medium entrepreneurs by assisting them financially in setting up capital intensive facilities like cold storages, warehouses, quality control labs, effluent treatment plants etc.

The Department of SHG & SE, Government of West Bengal also provides multiple platforms through which SHGs & SEs can market their products. The Department organizes district level as well as state level fairs and exhibitions for SHGs and SEs, such as Sobola Mela and also facilitates participation of SHGs & SEs in the annual India International Trade Fair and exhibitions. Other Departments under the Government of West Bengal also organize fairs that allow SHGs and SEs to market and sale their products.

However, the SHGs & SEs often experience challenges in terms of marketing their products, competing with organized enterprises (MSMEs and large industries) and contending with popular brands. In this respect as well, the Government has taken initiatives to promote products and help market them such as Karmatirtha is a flagship programme of the West Bengal Government. Training-cum-Marketing Complexes are being set up in districts and sub-divisional headquarters to facilitate training of SHGs for Skill Development and marketing of their products and SHGs receive skill development support to market their products from the Government under the scheme. Also, the West Bengal Swarojgar Corporation Limited (WBSCL) has opened two marketing outlets at Bhawanipur, Kolkata & Purulia District Magistrate Office. One Common Facility Centre at Diamond Harbour, South 24 Parganas has also been set up, where SHGs are able to process, produce & sell different products under one umbrella.

Coupled with the Government initiatives, organizations such as NABARD too play an eminent role in shaping the rural economy today. Policy interventions by the Centre and State Governments mostly remain sub utilised creating institutional challenges. The most important issue however is to channelize
the assistance schemes to the farmers’ doorstep through appropriate institutional arrangements. In such context therefore, often collaboration with suitable partners could help reap better results. 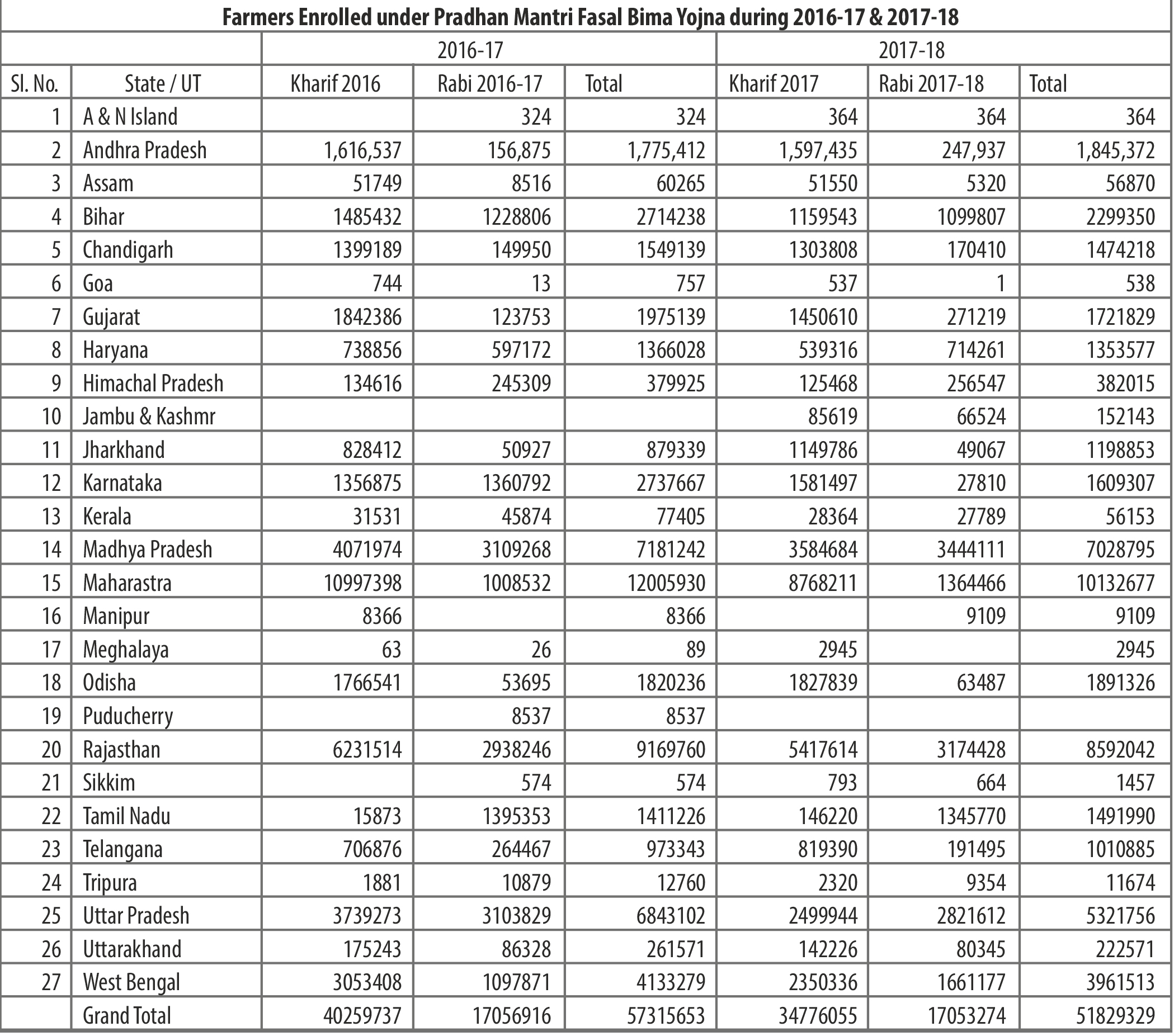 Based on our research we identified certain areas, addressing which could help achieve greater heights in agriculture as well as allied sectors such as animal husbandry, food processing, dairying and fisheries to provide an assured secondary source of employment and income especially for the small and marginal farmers. 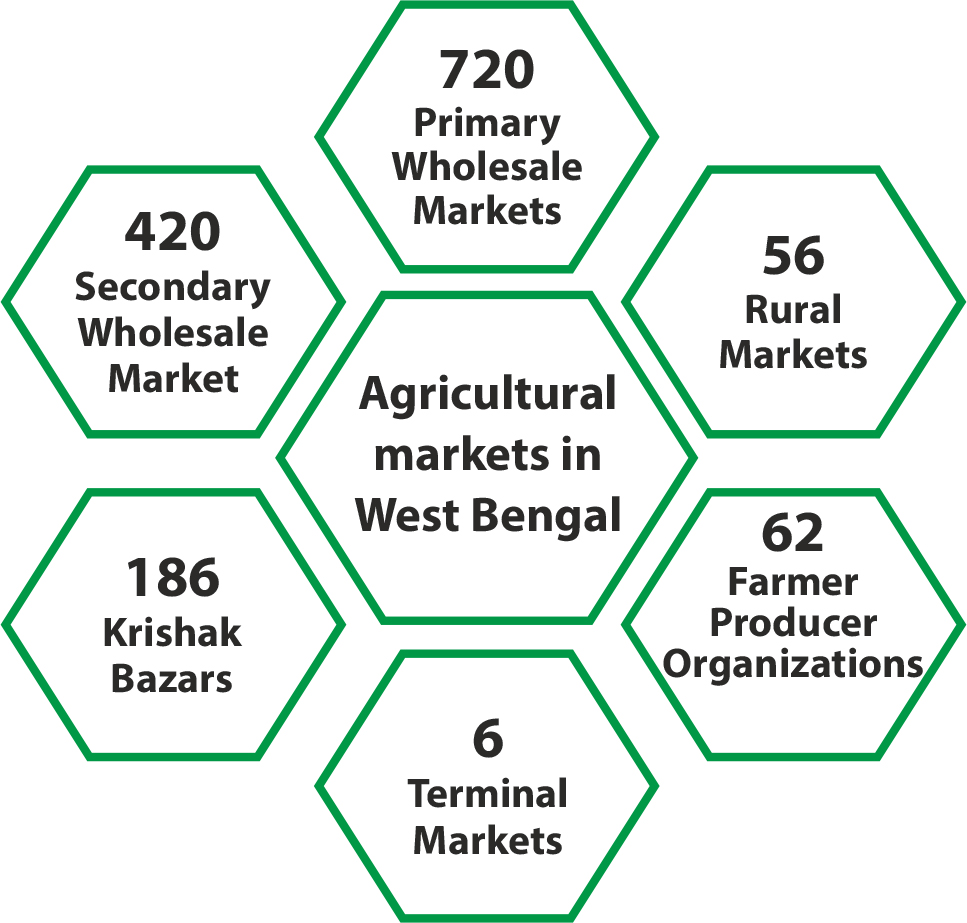 Also, an inclusive approach to provision for agricultural credit has to be undertaken to address the issue of skewness in its regional distribution. While Government measures are in operation aimed at improving productivity and its marketing, efforts of farmers need to be supplemented with better coverage of direct income/investment support. The West Bengal Government has undertaken an effective measure in which payment for government procurement of rice is being directly made to the farmers’ bank accounts. Similar steps are to be further initiated and implemented to create an efficient and smooth ecosystem in terms of income and institutional support reforms to provide healthy living.

Thus, in line with India’s vision of inclusive growth, economic growth is necessary for substantial poverty reduction and for the growth to be sustainable in the long run, it must be broad based across sectors and
inclusive of large part of a country’s labour force. As a key element of inclusive growth, agricultural development is essentially eliminating the macro problems of low agriculture growth, low quality employment growth, low human development, rural-urban divides, gender and socialite qualities, and
regional disparities from a nation. Hence, as inclusive growth considers the pioneer as the Government, policy actions and structural reforms in this sector is broad based yet critical.

In today’s scenario, amidst the challenging global happenings we pause to look at the domestic prevalent factors for a sector which serves as the building block of our nation and State feeding 70% of rural population and 50% of urban population with primary source of livelihood for 58% of India’s population.