SOUTH CHINA SEA AND THE ROLE OF SUPER POWER PLAYERS 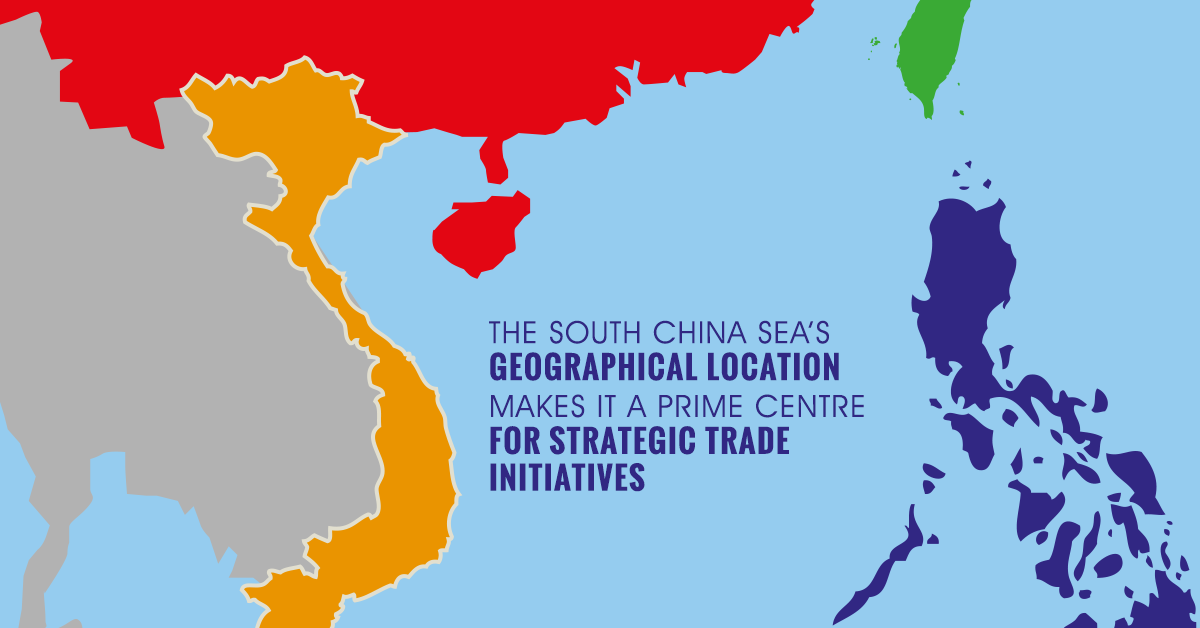 The South China Sea presents a unique challenge for several countries due to contested claims to access to various economic zones in the region. The South China Sea’s geographical location makes it a prime region for strategic trade initiatives and economic value, which has consequently spurred tensions among China, its Southeast Asian neighbors, and the US. According to statistics from the US Energy Information Agency, approximately 11 billion barrels of oil and 190 trillion cubic feet of natural gas deposits lie underwater. In addition, there are several viable fisheries that combined, could account for up to 10% of the world’s total supply of fish. Finally, a 2015 report released from the US Department of Defense found that roughly $5.3 trillion USD worth of goods are shuttled through the South China Sea annually ($1.2 trillion of this involves the US).

As of late, China has increased its military presence in the area by stationing military bases on artificial islands it has created and by deploying warships in waters that were previously considered to be unclaimed or already under jurisdiction. Thus, neighboring countries as well as the United States have viewed this growing activity as a potential security threat and remain wary of Beijing’s compliance with international regulations regarding maritime activity.The South China Sea is a vital conduit for global trade and attempts to restrict access to it could prove to have significant negative consequences on the global economy. American officials fervently maintain that they are not trying to limit the rise of China, but rather, are taking steps to ensure Beijing’s cooperation with established legal frameworks.

As a result of these sentiments, the US has upped its naval activity as well. Early this year, President Trump authorized a ninth freedom of navigation naval operation in the area. However, according to a recent ASEAN poll, two-thirds of ASEAN members believe that US engagement with the area has decreased, and a third do not believe that the US has the capacity to serve as a viable strategic partner and security enforcer.Thus, despite the Trump administration’s commitment to preserving open waters and compelling China to abide by international laws, ASEAN members have expressed their suspicions regarding American presence in the region.

The United States, Philippines, and China

Further complicating tensions was a recent announcement by the US Secretary of State Mike Pompeo that reaffirmed the country’s commitment to protecting the Philippines from Chinese “armed attack,” which was construed by many as a rebuttal of Chinese activity. This statement is particularly relevant in light of a 2016 legal battle between China and the Philippines over Chinese claims to most of the region’s waters.However, even though the Hague deemed Chinese activity as in violation of international rules, Beijing ignored the ruling and pressed forward with its aggressive initiatives. Pompeo’s statement marked the first time that a US official had explicitly expressed a commitment to Filipino sovereignty in the area and is indicative of an increasingly complicated power dynamic.

A key focal point in the United States, Philippines, China relationship triangle is how Filipino president Rodrigo Duterte positions the country from a foreign policy perspective. As of late, the president has been fickle in his approach towards China. Upon becoming president, Duterte immediately sought to improve economic relations with the country despite the arbitration ruling; for example, he improved access to Chinese investments and migrant workers. Furthermore, both countries mutually agreed to pursue joint ventures for energy extraction in the South China Sea. Nevertheless, despite this easing of tensions, Filipino citizens have criticized Duterte’s softer stance and have expressed concerns regarding growing Chinese activity (such as how over 200 Chinese ships have been spotted in proximity to Thitu Island, which is home to Filipino military bases and citizens). A recent poll found that 87% of Filipino citizens would favor more assertive claims to disputed areas, and the Filipino Department of Foreign Affairs declared the presence of Chinese vessels near Thitu Island to be illegal. Duterte issued a statement in response telling China to withdraw its ships and even threatened the use of military forces as necessary. This proposal stands in stark contrast to his otherwise conciliatory approach towards China and comes at a significant juncture between Duterte’s traditionally soft relations with China and an increase in American commitment towards protecting the Philippines.

However, the US’ presence may not be well-received. Defense Minister of the Philippines Delfin Lorenzana expressed concerns regarding the sixty-sevenyearold Philippines-US Mutual Defense Treaty (MDT), which promises mutual defense should either one of the countries be attacked by a foreign body. However, much of the treaty’s language is vague and according to Lorenzana, may further jeopardize the Philippines given the US’ growing military presence in the South China Sea. Thus, this piece of legislation could further exacerbate already high tensions in the area.

Current Situation and Looking Ahead

Presently, the military presence of various countries continues to escalate. On April 23rd, China commemorated the 70th anniversary of its navy by sailing a fleet of ships near its port at Qingdao, in order to reaffirm its commitment to “peaceful development.” In response, the US Coast Guard and Navy also deployed ships in contested waters. Thus, currently, the South China Sea has evolved into an arena for power projection and geopolitical rivalry between the United States and China. Analysts and leaders fear that both sides are slowly inching towards war with one another, which will embroil other neighboring countries with diverse agendas; however, it is essential to note that armed conflict is not desirable for any party. There is a fine line between power projection and open conflict, and it appears that both the US and China are tip-toeing the boundary but not crossing it.

It was also recently confirmed that a French warship was spotted sailing through the Taiwan Strait earlier this month. As an important ally of the United States, this move was supported by Washington as an exercise of freedom of navigation and demonstrates that the US has allies to support its stance. France’s precedent may inspire other American allies like Japan and Australia to up their presence in the already tense South China Sea. Overall, the South China Sea remains a hotly contested region, and it will be essential to closely monitor how these tensions play out in the near future.

Aside from the US-China rivalry, other nations in the region also play an important role in shaping the power play. In January 2019, Vietnam made a push to curtail Chinese activity by advocating for a pact that will ban activities such as constructing artificial islands, blockading strategic points, and deploying weapons such as missiles.Thus, Vietnam could set a precedent for other smaller ASEAN countries in the region to follow, especially considering that as of late, China has been the predominant power. While the 2016 Philippines arbitration case put a cap on Chinese expansionism, the ruling ultimately did not change the status quo. However,Vietnam is now expressing its opposition to Chinese hegemony in the South China Sea, which could lend a voice to smaller countries looking to assert themselves geopolitically in this critical region. In addition, American foreign policy will favor these pushbacks against Beijing’s influence.It remains to be seen, though, how this dynamic play out in the near future. There is a careful balance between assertion of power and tactful diplomacy that has beenobserved among actors on all sides, as armed conflict is not desirable for any party involved. However, this polarity has become increasingly difficult to navigate given the growing tensions in the region. It is important to also keep in mind that the South China Sea is not simply a proxy battleground for the US-China rivalry; rather, smaller countries in the region also have a stake in the region, and it is essential to also account for their agendas as well. This smattering of different perspectives and priorities will increasingly contribute to an uncertain situation that needs to be traversed with caution.

The South China Sea is a critical hub for trade, and growing animosities in the region have the potential to seriously impact global economic activity. It will be essential to observe the interplay between Chinese aggression and American containment responses over the near future, as well as consider how neighboring countries assert their own unique agendas and respond to these tensions. The South China Sea is a vital geopolitical and economic region, and closely observing how complicated power dynamics play out in it will be critical for governing bodies, businesses, and political figures worldwide.