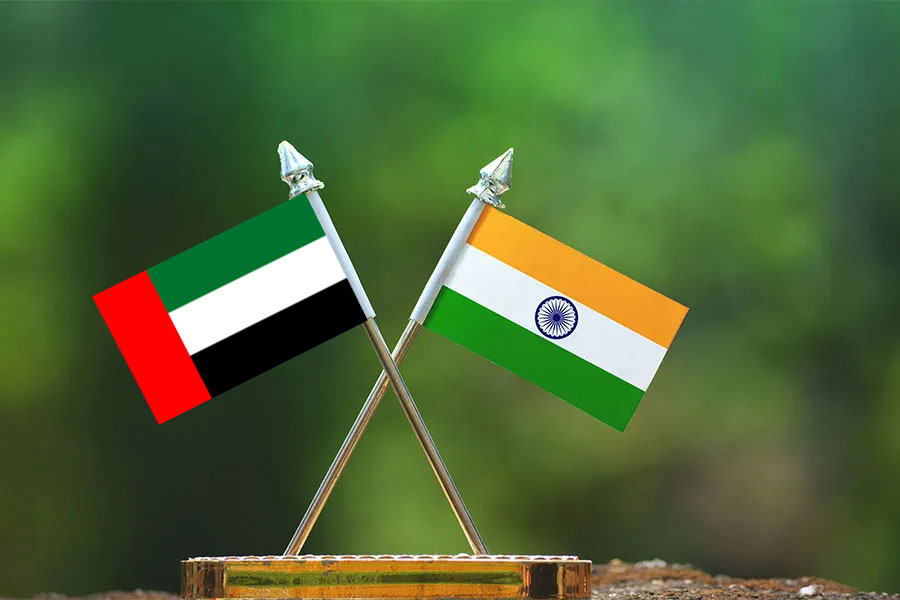 Indian nationals make up one of the largest population groups in the UAE, a major source of foreign remittance and Net Factor Income from Abroad (NFIA). UAE is home to more than 35 lakh Indian-origin people. The flow of Foreign Direct Investment (FDI) between the two countries is also immense. As per the UAE Embassy in India, the total bilateral FDI flow recorded was $67 billion from 2003 to 2021. The FDI flow from India to UAE was concentrated in sectors like coal, oil and gas, and real estate while a significant amount of UAE’s FDI flowed into India’s real estate, ceramics, and glass industries. Despite these significant bilateral ties, India and UAE were not part of any trade agreement, customs union, or regional economic cooperation. The countries imposed the Most Favored Nation (MFN) tariffs on each other.

The weighted averages of MFN tariffs applied by UAE and India were 3.94% and 6.59% respectively in 2021. Such high tariff rates reduced the competitiveness of the products in foreign markets and the full market potential could not be utilized. Apart from tariffs, non-tariff barriers played a pivotal role in restricting the domestic producers of each country to expand their footprints in foreign markets.

How CEPA would benefit India?

The landmark CEPA signed between the two countries is a major boost to the bilateral relation and economic cooperation between the two countries. Negotiations for the trade deal were closed within the shortest possible duration of 88 days which shows the desire of both nations to actively participate in the mutually beneficial economic deal. Very aptly pointed out by Indian Commerce and Industry Minister, Shri Piyush Goyal, through this agreement, India may enter the “golden era of economic and trade cooperation.” As per the estimates, the free trade agreement is anticipated to increase the bilateral non-oil trade between the countries to $100 billion from the current $60 million, over the next five years.[1] Moreover, it is expected to create more than 10 lakh jobs in India by boosting the export of labor-intensive goods.[2]

Given the strong trade relationship between the two countries, signing a free trade agreement would benefit the consumers as well as producers of both countries. Under the CEPA, both countries would be able to reap the benefits of free trade as exports would be tariff-free. The consumer surplus would go up while producers would benefit through increased profit margin induced by the enhanced competitiveness of their products.

This agreement would act as a gateway to expand India’s trade in the Gulf region. Negotiation of similar trade deals with other Gulf Cooperation Council (GCC) countries like Kuwait, Saudi Arabia, Oman, and Bahrain would be easier. Moreover, the transport and logistic infrastructure, if exploited optimally through this FTA, would provide better market access to the wider MENA region. As a result, the spillover effect or positive externality of this agreement is anticipated to be enormous.

Tariff often makes exports expensive in the foreign market and reduces their demand. Since the primary objective of any tariff measure is to provide a price cushion to domestic producers, it makes exports less competitive in the tariff imposing country. Through this free trade agreement, both the countries would enjoy tariff-free access to each other’s market. 90% of India’s export and 80% of the total lines of the trade from India to UAE would be subjected to free tariffs. The range of products and tariff lines would be expanded more in the upcoming five years. The foreign exchange reserve of India is envisaged to grow as export revenue starts skyrocketing.

Both foreign direct investment (FDI) and foreign portfolio investment (FPI) are expected to grow. The trade deal would create a conducive environment for investors and attract more funds to the Indian market. Deep-pocketed investors of the UAE would decipher this as a sign of an optimistic business opportunity.

The partnership will help small enterprises, startups, heath-tech, edu-tech, and fintech firms of India by opening up a new market. All segments of the business including traders and farmers would gain as a new door of opportunity and investment would induce business confidence. The ease of doing business in many segments like generic medicines, gold, diamond, gems, and jewelry would improve. New avenues of digital trade have taken center stage in the agreement as governments have identified e-commerce and e-payment solutions to be of special focus.

The deal is definitive to uplift the UAE-India remittance corridor. Already the remittance fees on the transaction in the UAE-India corridor are among the lowest globally (the rate stands at 5.31% while the global average stands at 6.3%). An additional five percentage point reduction, as suggested in the deal, would convert into a total of $16 billion savings, combining the two countries.[3] The increased level of transaction, following these favorable provisions, would incentivize the fintech sector.

With increasing attention towards global warming and climate change-related issues, the deal has appropriately internalized some of the issues. Both countries have pledged to support each other in achieving a clean energy mission. A remarkable development of this deal is the decision to establish a joint hydrogen task force and scale-up technology through a focus on green and renewable energy generation.

The two nations have promised to cooperate in maintaining peace and stability in the middle eastern region. They will extend all possible support to each other in defence exchange, sharing technology, training, and capacity building that may be necessary for achieving the aforementioned objective.

Thus, the vast coverage of the deal in terms of encompassing several important economic, social, trade, and political matters is commendable.

India has a reputation for signing unequal trade deals and failing to make capital out of seemingly beneficial agreements. Some of the possible areas of threat of this agreement are as follows:

The deal has the potential of “opening up a myriad of opportunities for professional, entrepreneurial and overall human development”.[5] However, India needs to put enough effort into exploiting the benefits to its maximum possible extent and not let this golden opportunity turn out to be just another trade deal that benefits the partner more at the cost of reduced welfare of the country. Collaboration and cooperation between government, corporates, businesses, and consumers are necessary to ensure optimal use and implementation of all the preferential measures and clauses of the agreement.

With an increasing focus on economic integration and globalization, regional, bilateral, and multilateral economic cooperation is assuming immense importance. Thus, India should continue playing a proactive role in the negotiation and implementation of free and preferential trade agreements.

The blog is intended to serve a wide spectrum of audiences, with or without any prior understanding of international trade relations or international economics. Policymakers, academicians, researchers, and corporate houses interested in understanding and developing expertise in this area may find the blog a good read. For instance, an exporting and trading company may find ways to penetrate in UAE market and increase its business footprint in the Gulf region by identifying some opportunities for its product through this blog. Anyone interested in international development and trade would get to know the newly developing cordial relationship between the two countries. A policymaker or a researcher may get ideas to expand the research and discover ways to establish such agreements with other trading partners of India.

[NOTE: The purpose of this blog is to shed light on the various aspects of the India-UAE CEPA agreement. Through providing a critical review of the agreement, the blog has tried to identify some future possibilities that may be exploited by India through duty-free access into UAE, MENA, and Gulf regions. The blog identifies some areas of threat and possible ways forward for India to make the most out of the agreement.]

[3] Source: UAE and India CEPA deal can influence the cost of remittances too | Markets – Gulf News