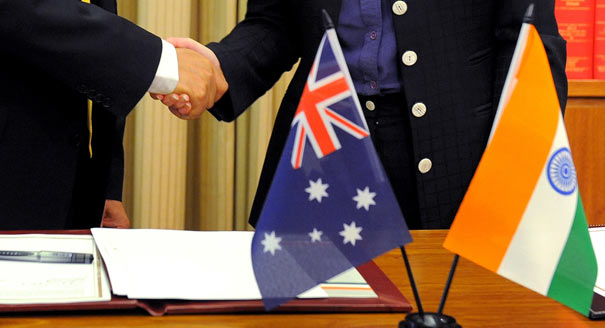 Fuelled by the complementarities of the two nations, the recent decade has seen remarkable growth in trading relations between India and Australia. The countries have witnessed an ascending growth in their two-way trade volumes, with a trade value growth from $13.6 billion in 2007 to $24.3 billion in 2020. In 2020, India was recognized as Australia’s 6th Largest Export market, after being the recipient of almost $17 billion worth of exports. Furthermore, the Indo-Australian trade pact has provided a larger impetus to boost trade, generate employment and collaborate in other socio-economic aspects.

The history of the bilateral relation

The historical ties between the two countries date back to 1788 followed by the European settlement in Australia.[1]   All trade movements from the penal colony of New South Wales were controlled by the British East India Company through Kolkata. In due time, the relationship underwent an evolution developing along with an existing economic and positive engagement, into a long-term strategic partnership. In explaining the roots of this bilateral tie, the policy document published by the Ministry of Economic Affairs, GoI, states – “The two nations have much in common, underpinned by shared values of a pluralistic, Westminster-style democracy, Commonwealth traditions, expanding economic engagement and increasing high-level interaction. The long-standing people-to-people ties, ever-increasing Indian students coming to Australia for higher education, growing tourism and sporting links have played a significant role in further strengthening bilateral relations between the two countries.” The White paper released by the Australian government on its foreign trade policy in 2017, has already identified India to be in the front rank of Australia’s international partnership. The countries share congruent security interests in terms of maintaining stability and strategic openness of the Indian Ocean.

Such similar economic, security and political interests have recently pushed the leaders of the two countries to pave way for free trade and strengthen the gains from duty-free access to goods. India and Australia have recently signed a trade pact – ‘The Economic Cooperation and Trade Agreement (IndAus ECTA)’,  which has promised to provide duty-free market access to 96% of India’s exports to Australia.

What does the Economic Cooperation and Trade Agreement (IndAus ECTA) have to offer to India?

The long-awaited pact is likely to boost bilateral trade in goods and services to $45-50 billion in the next 5-years from the current level of $27 billion.[2] As per the estimates of the Indian government, the favourable impact on employment figures would be prominent as well. It is likely to generate more than 1 million jobs, both through direct and indirect channels. Some of the Australian export goods that stand to gain from the duty-free access are coal, sheep meat, wool, wines, almonds, lentils, and certain fruits. Overall, 85% of Australian export would enter the Indian market duty-free.

Analyzing in the purview of Indian producers and consumers, while the trade pact would save the surplus for the consumers and give them access to a broader set of choices at an affordable rate- domestic producers may face steep competition from the increased price-competitiveness of the Australian exports. Though the current coverage of duty-free exports of India stands at 96%, the agreement pledges to expand the scope of the agreement to 100% in the next 5 years. Hence, domestic producers may also gain through tariff-free market penetration in the Australian market. The ultimate impact on the domestic production may be ambiguous – the direction and magnitude of which depends on how it can exploit the provisions of the agreement to remain competitive in the domestic market while maximizing its trade footprint in the newly opened foreign market.

Without the trade deal in place, Indian exports were subject to a 4-5% higher tariff rate in many labour-intensive sectors relative to its competitors like China, Thailand, and Vietnam, which already has a Free Trade Agreement (FTA) with Australia. Therefore, this trade deal would provide India with a level playing field in addition to a significant boost to its merchandise exports. India has reserved some key products under the ‘sensitive product’ category which would allow her to protect her nascent domestic sector against cheaper and better-quality Australian products. These products include dairy, wheat, rice, chickpeas, beef, iron ore, sugar, toys, apples, and others. Apart from the tariff barriers, the scope of the agreement has been expanded to include strict provisions on rules of origin. Strict rules of origin prevent any routing of products from other countries and provide for a safeguard mechanism to address any sudden surges in imports of a product. Unlike most of the other trade agreements, this has expanded the scope beyond trade barriers and included equally important provisions of non-tariff barriers and rules of origin.

Looking at the above chart, we can deduce that agricultural products, minerals, and fuels which are occupying a larger share of India’s export basket are envisaged to gain significantly through this tariff-free access.

Possible threats/areas of improvement of the pact

While there is no denying the fact that the scope of the trade deal is sufficiently broad, it is to be noted that this is just an interim agreement. However, some possible areas of pitfalls that need attention are highlighted below –

This interim trade pact is seen as just the beginning of the strategic partnership between the two nations. To further facilitate bilateral trade, Australia is all set to sign an even larger trade agreement with India – Comprehensive Economic Cooperation Agreement (CEPA) by the end of this year. The CEPA would add value to the  ‘IndAus ECTA’ pact by including provisions on digital trade. The ongoing global pandemic has popularized the digitalization of trade with increasing momentum. Thus, excluding digital trade from the purview of any trade agreement would ideally deem it incomplete. Apart from the CEPA, the two countries have set a long-term vision for promoting a few priority sectors. Originally released in 2018 by the Australian government, the ‘India Economic Strategy 2035’ aims to forge long-run partnerships in sectors like energy, tourism, education, health, and security.

India and Australia also share a trilateral Supply Chain Resilience Initiative (SCRI) with Japan that can be further strengthened through this trade agreement. The countries can align their efforts in capacity building, and promotion of domestic manufacturing and explore other partners to join hands in this initiative. Moreover, both the countries being active members of the QUAD (Quadrilateral Security Dialogue), can leverage the collation to generate further impetus for increasing trade relations between all the members of the QUAD. Therefore, holistic economic cooperation that not only covers international trade-related interests but also helps the countries to move towards the vision of strategic partnership encompassing various allied areas of shared interest should also be internalized as a part of long-term economic cooperation.

Implications for the corporates

Once ratified by the Australian Parliament, it is going to have a beneficial impact on Indian IT firms. The tax levied by the Australian Tax Authority (ATO) on the income of certain offshore technical services provided by IT companies shall be exempted from tax. This move is likely to enhance the profitability of Indian IT corporates and boost the volume of offshore services. [5]

Moreover, corporates taking part in exploring bilateral trade opportunities and finding ways to enhance trade footprint between countries may use the opportunity to help the exporters identify newer trade channels and take benefit of the agreement’s provision. The plethora of opportunities opened by this trade agreement can be tapped with the expertise of international trade economists and experts. Consultation on improving trade finance, trade revenue, avoiding trade barriers, and identifying investment opportunities may be availed by organizations trying to leverage the bilateral trade relation between India and Australia.