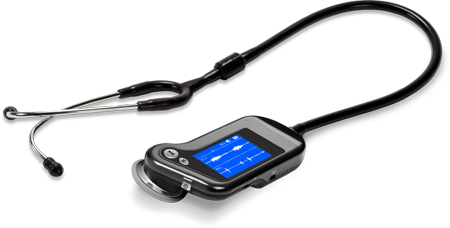 The medical device industry of India, consisting of a wide spectrum of components and segments, has been consistently registering a double-digit growth rate in the past few years averaging to 15.8% from 2009-16. The current market size is estimated to be USD 11 billion which is the 4th largest in Asia. With a large number of multinationals dominating the sector and Small and Medium Enterprises (SMEs) growing at an unprecedented rate, the market size is expected to reach USD 50 billion by 2025. Being a “sunrise segment” in the healthcare space under the “Make in India” initiative, the government has been undertaking several proactive policy interventions to promote the industry. An attempt has also been made to simplify the regulatory requirement and restructure the traditional inverted duty structure to enhance domestic production.

However, having said this, the sector is still caught up in the “low-level equilibrium trap”[1]. While some cities of the country attract huge amounts of medical tourists, other areas are deprived of the basic medical facilities. Similarly, the demand for low end consumables overweighs the demand for high-end and high-tech products. The demand constraint of the sector not only limits its future growth prospects but also fails to attract investors and producers. In order to encourage foreign investors,100% FDI is permitted in the sector through automatic route.

Besides, four MedTech parks are being constructed around these clusters to facilitate infrastructural development and proper ecosystem for the suppliers, manufacturers, developers and medical device companies. The industry in India is segregated into five major segments:

[1] “Low-level equilibrium trap” concept was introduced by R. R. Nelson in context of low of per- capita income. In context of demand, it means low-level of demand is caused by low investment which in turn restricts the growth of the market and the industry continues to be “trapped” in the low equilibrium situation. 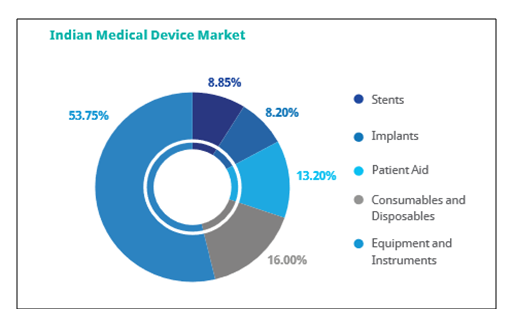 Under the new “Medical Devices Rules 2017”, medical devices are classified into the following four groups as per Global Harmonisation Task Force (GHTF)

India mostly specializes in the production of the first two categories which involve less innovation and technology. Class C and Class D, largely termed as Advanced Medical Devices (AMDs) involve higher degree of risk. High level of technological expertise is pre-requisite for the production of such AMDs.

Advanced medical devices are classified to be those devices which are mostly driven by advanced technology and innovation. Manufacturing AMDs require substantial effort, manpower and intelligence devoted towards research and development. Some of the most advanced technology supported with innovations in the field of medical devices are health wearable (Apple Series 4 Watch that has an integrated ECG to monitor the wearer’s heart rhythms), 3-D printing which can be used to create implants and joints to be used during surgery, Bluetooth enabled smart inhalers etc. AMD is largely prevalent in advanced economies mainly in the West and Japan. Indian medical device market lags behind in terms of production of AMDs largely due to the lack of research and development (R&D) and innovation. Traditionally, the industry has been focusing more towards conformance and reproducibility rather than innovation and novelty. Technology based product innovation is almost rare in India. Some initiatives that may be undertaken to expand the AMD market in India include:

India’s Central Drugs Standard Control Organization (CDSCO) under Directorate General of Health Services, Ministry of Health and Family Welfare (MoHFW) is the responsible regulatory body of medical devices in India. Until recently, Indian regulatory system(medical device directive) only covered 15 “notified categories” and the rest of the market had been largely unregulated. However, starting from April 1, 2020, India has rolled out new regulations that notifies every medical device sold in the country.

Around 70-75% of the domestic demand is met through import while around 30% is produced domestically and exported. Huge import dependence therefore remains one of the major stumbling blocks for the industry. An interesting phenomenon of two-way trade or intra-industry trade dominates the trade scenario between India and its other trading partners where the same product group is both being exported and imported. This seemingly paradoxical situation can be easily explained by variation in product quality and economies of scale. The import basket of India mostly consists of high-tech and high-end consumables whereas its export is biased towards low-end and minimum tech-embedded products. Thus, an insight into India’s trade pattern reveals its traditional production structure and technological backwardness. To achieve self-reliance, India needs to overcome this import dependency through import replacement and focus on domestic market expansion.

The sector also lacks investment dedicated towards research and development services and innovation. For India to emerge from the vicious cycle of low-end production, substantial effort and push has to be given to the private players for undertaking research activities. To overcome the dependence on import for high-end consumables, domestic production of such sophisticated equipment with the required R&Dunits needs to be promoted. Likewise, to prioritize high tech production amongst manufacturers, reliance on imports must be lowered.

The domestic market is also characterised by sporadic demand generation. Considering the highly skewed income and wealth distribution, the demand remains concentrated only within a few segments of the industry. While some cities like Bangalore and Vellore attract a huge pool of medical tourist, many other cities are deprived of basic healthcare amenities. Thus, there persists an asymmetry in the demand generation both across the country and the product groups.

The industry being at a very nascent stage possesses significant potential to become the growth driver of the economy. The recent policies and measures adopted by the government open up a plethora of opportunities for the manufacturers and investors. Moreover, the country’s aging population coupled with its increasing disposable income and insurance coverage is expected to generate substantial demand. An insight into the national health profile also unveils the shift of the disease pattern towards chronic diseases like diabetes, cardio-vascular diseases, lung and renal diseases which require prolonged treatment and frequent use of various sophisticated devices. Both private and public spending on healthcare have been rising at a rapid rate. According to the National Health Policy – 2017, healthcare spending by government is estimated to be 2.5 percent of GDP by 2025. Several demand as well as supply side factors continue to provide unique opportunities for the sector. Some of which are as follows-

The recent outbreak of the novel coronavirus has led investors and manufacturers to shift their focus from China which was a major supplier of Active Pharmaceutical Ingredient (API) and Personal Protective Equipment (PPE) towards other emerging nations. India, being a labour-intensive country, stands a good chance to become the next manufacturing hub with introducing incentives to attract multi-nationals from India and beyond. As China lies at an important stage of the product value spectrum, it widens opportunity for India to capture the higher end of the spectrum with its comparative advantage and investor-friendly policies.

Some of the essential factors determining the sector’s future potential and growth prospects  need re-consideration and re-orientation. Policy intervention and measures can be successful only if they are guided by proper implementation. The following measures are necessary in order to re-structure the critical parameters of the industry –

* Boosting research and development (R&D) in businesses is the need of the hour and effective academia-industry partnership is indispensable for it. Innovation lies at the heart of academia, and universities generate high-quality, intellectual property on a large scale. However, most of these innovations do not result in commercial translation. For optimal utilization of such innovations, the industry needs to join hands with the academia.

* Collaboration among the manufacturers and joint venture projects can help overcome various challenges. Seminars and events can be organized at regular intervals to bring the industry together.

* A sturdy infrastructure is a pre-requisite for the expansion of the sector. The industry needs to replace its structural backwardness and traditional technology with modern AI based capital-intensive methods.

* Insufficient domestic demand contributes to low productivity and limited market size. A thrust to the healthcare system is expected to generate substantial demand for the medical devices. Improvement of the overall healthcare structure will also attract medical tourists which would also contribute to the demand.

* The medical devices in our country are categorised into four broad risk categories with Class A being the lowest and class D being the highest risk category. Thus, policies need to be designed separately for each of the risk categories keeping in mind their special features and needs. 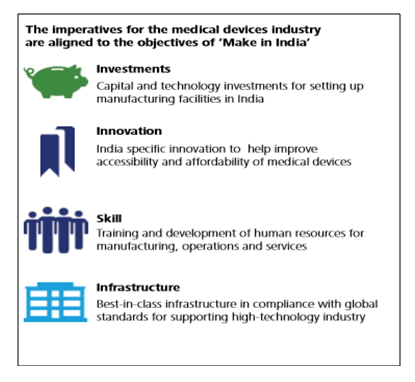 Medical devices sector of India is at a crossroad and needs intervention in many ways. In the recent past, a number of measures have also been undertaken to ensure sustainable and substantial growth of the sector. However, growing health concerns and stress on achieving self-reliance demand faster growth of the sector. Although many measures have been taken in the past to redress these issues and significant impetus initiatives like “Make in India” have already been implemented, more needs to be done to support the industry. Thus, the potentialities of the Indian medical device sector as a growth driver would enable India to emerge as the next medical device manufacturing hub of the world. 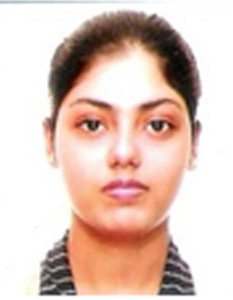 About Intueri: Intueri Consulting is a management consulting firm with nearly 100 man-years of experience in managing organizational challenges, including managing firms and clients through some of history’s biggest crisis periods such as the 1997 Asian Financial Crisis, 9/11 led crisis, 2007-08 global financial crisis. This vast repository of organizational management experience, accrued by senior management, over decades of managing large multinational firms and clients enables Intuerito develop effective, efficient crisis management strategies and provides it with a unique perspective into events and decisions that take into consideration all important aspects of a firm, including assessment of primary, secondary and even tertiary order potential effects on the firm on account of implementation of strategies. Intueri has been helping organizations of a different scale to raise funds in a hyper-competitive ecosystem and has prepared an end to end value offering for an investor roundtable. The firm has consultants, well balanced with the domain knowledge and cross-sectoral industry analysis approach and possesses a strong network of financial advisors.

Feel free to reach out to us for a detailed discussion.