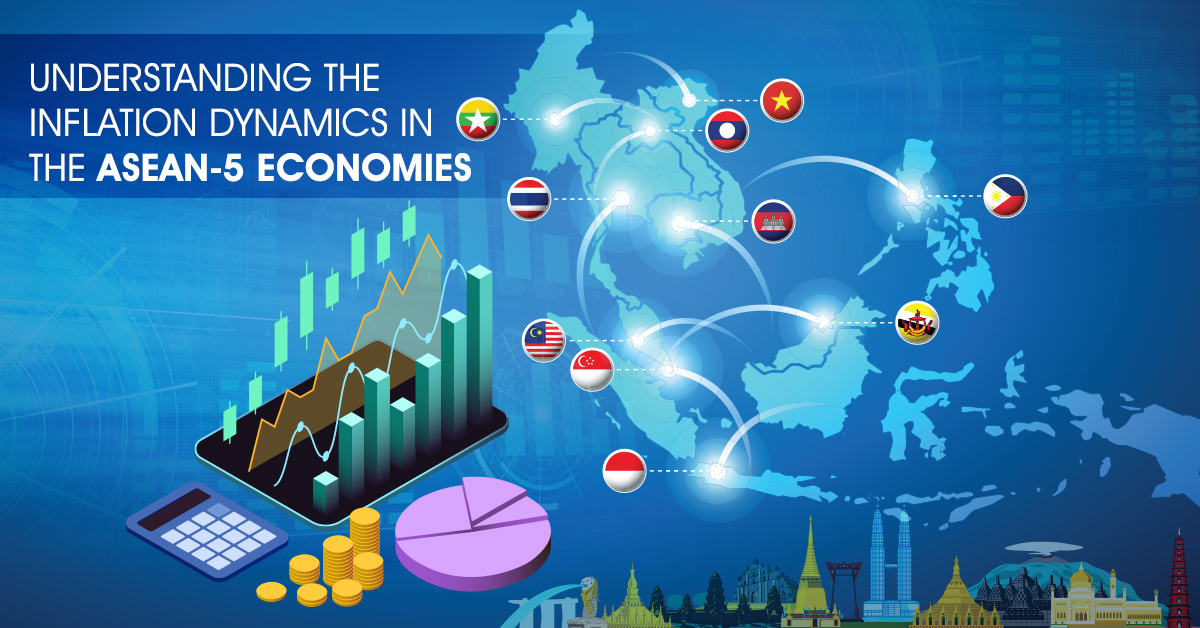 In 1997, the Asian Financial Crisis (AFC) caused a series of currency and stock devaluations that were decelerated when the International Monetary Fund (IMF) and the World Bank intervened with financial support. Since then, inflation dynamics have undergone substantial changes in several Asian economies. This included the major five of the Association of Southeast Asian Nations (ASEAN)- Indonesia, Malaysia, Singapore, Thailand and the Philippines.

Inflation-targeting monetary policy frameworks implemented post-AFC in ASEAN-5 economies and other emerging market economies (EMEs) have helped reduce headline inflation and inflation volatility since the early 2000s. However, these frameworks have continued to face different challenges, and it was after the Global Financial Crisis (GFC) that it became evident that the monetary policies of many EMEs were imperfectly designed. The existing policies were unable to encompass the domestic macroeconomic and financial stability conditions and other concerns of these EMEs. Therefore, an evolution in policy frameworks by the central banks was required to strengthen policy autonomy and reduce risks. Accordingly, the framework was expanded to include macro prudential policies (MPPs) and capital flow management measures (CFMs) to manage capital inflow surges and deal with systemic risks. Foreign exchange (FX) intervention was also introduced to respond to potentially disruptive volatile capital flows and market conditions.

In other developed economies like the US and Euro Area, monetary policies over the last few years after the financial crisis of 2008 have been largely accommodative with measures like quantitative easing. The Federal Reserve and the European Central Bank since then have been maintaining price stability through inflation targeting regimes. While inflation rates over the medium term have been restricted below 2% level, policy rates have moved to near zero. Alongside, these Central banks have resorted to quantitative easing mechanisms by bond purchases. Asian countries like Japan have also taken similar measures to contain inflation and maintain stability in the economy. Such shift to accommodative policy stance by advanced countries has been impacting emerging economies as well. Looking into such inflation and monetary policy interactions as adopted by several countries, we now focus on understanding this relationship among ASEAN nations. We consider the major five ASEAN countries- Singapore, Thailand, Malaysia, Indonesia and the Philippines in the next section. 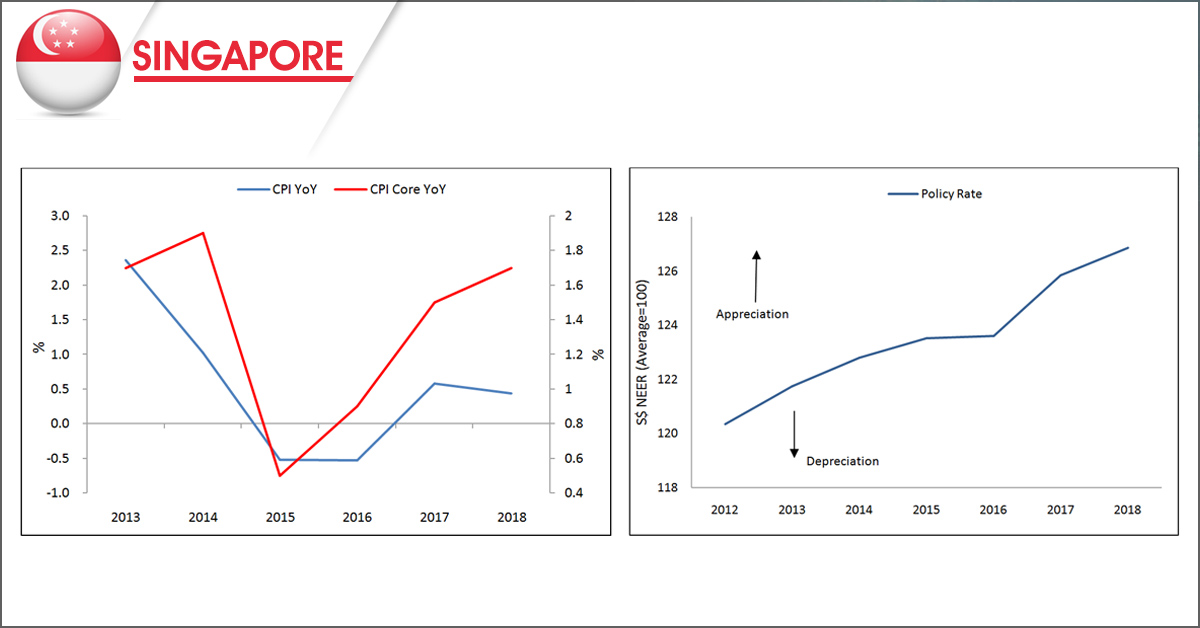 Singapore’s inflation since 2013 have been at an average of 0.6% annually. In 2015 and 2016, inflation fell to 0.5% respectively. This was largely due to uncertainties over global oil prices and domestic one-off issues. Singapore’s Central Bank- Monetary Authority of Singapore (MAS) has not adopted any inflation targeting regime. However, core inflation on an average have been targeted to be kept just under 2%. The Central Bank’s monetary policy historically has been exchange-rate based. Singapore dollar NEER (nominal effective exchange rate) (index average at 100) has been determining the policy band of the bank. In 2013, MAS dollar NEER index was 121.74. Appreciation of Singapore dollar NEER mainly reflects weakening of the US dollar and any shift in US Fed policy stance and of the Euro and Sterling. Domestically, MAS monetary policy movements are captured by change in the slope of Singapore dollar NEER policy band. 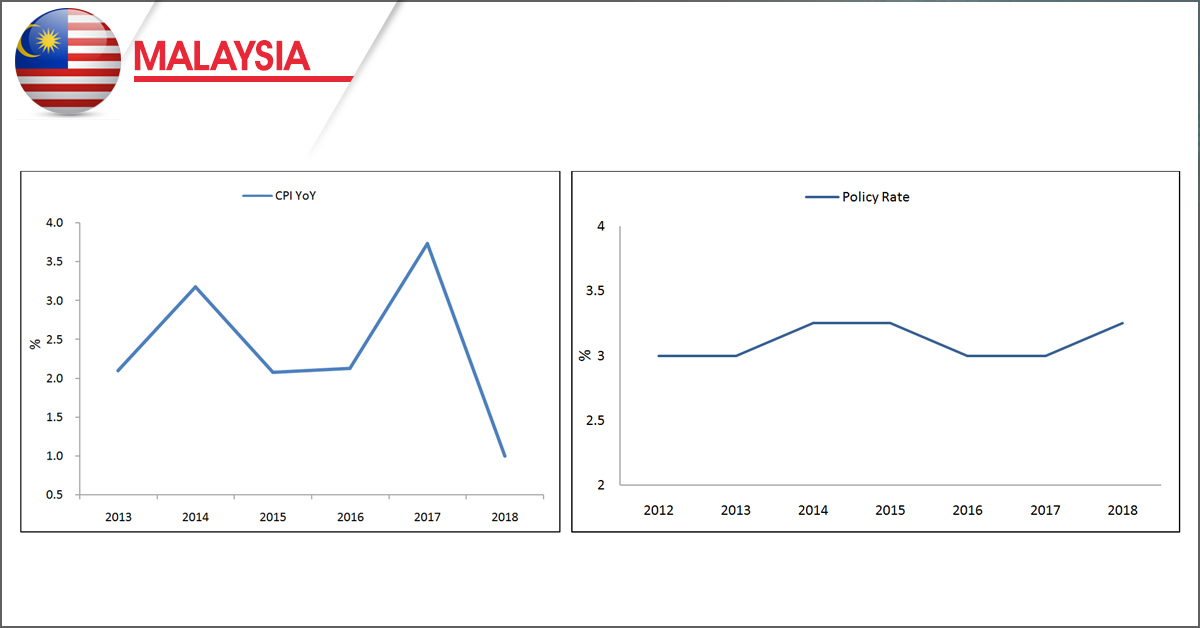 The Malaysian Central Bank adopted a fixed exchange rate regime initially, in the aftermath of the AFC, but moved to a flexible rate regime in 2005. Their new monetary policy framework focused on price stability while also taking into account the impact of monetary policy on financial stability. Targeting inflation has also been a prime objective of the Central Bank to maintain stability in prices while considering economic developments in the economy.

The Central Bank has kept inflation well-contained with a median pace of 2.1% year on year since 2002 without the benefit of a formal target to anchor inflation expectations. More recently, a relatively high and even increasing forward-looking coefficient and stable long-run expectations have decisively contributed to limit disinflationary pressures stemming from falling oil and import prices since 2014. 2013 recorded headline inflation at 2.1%, while core inflation, an indicator of demand-driven price pressures, moderated to 1.8%. Against a backdrop of increased uncertainties on the balance of risks surrounding the outlook for domestic growth and inflation, the Monetary Policy Committee (MPC) maintained the Overnight Policy Rate (OPR) at 3.0%. Rise in inflation in the following year to 3.2% and increasing consumer debt, for the first time since mid-2011, drove the Central Bank to raise OPR by 25 basis points to 3.25%. Attempt to temper inflation continued for the next couple of years till 2017 saw a jump in inflation to 3.7%, policy rate was then at 3.0%. Raising interest rates by 25 basis points in 2018 was yet again resorted to as a step towards slowing down inflation going forward on the domestic front. Subsequently, as a response to the US Fed’s change in policy stance this decision was in line with moves of other Asian Central Banks. 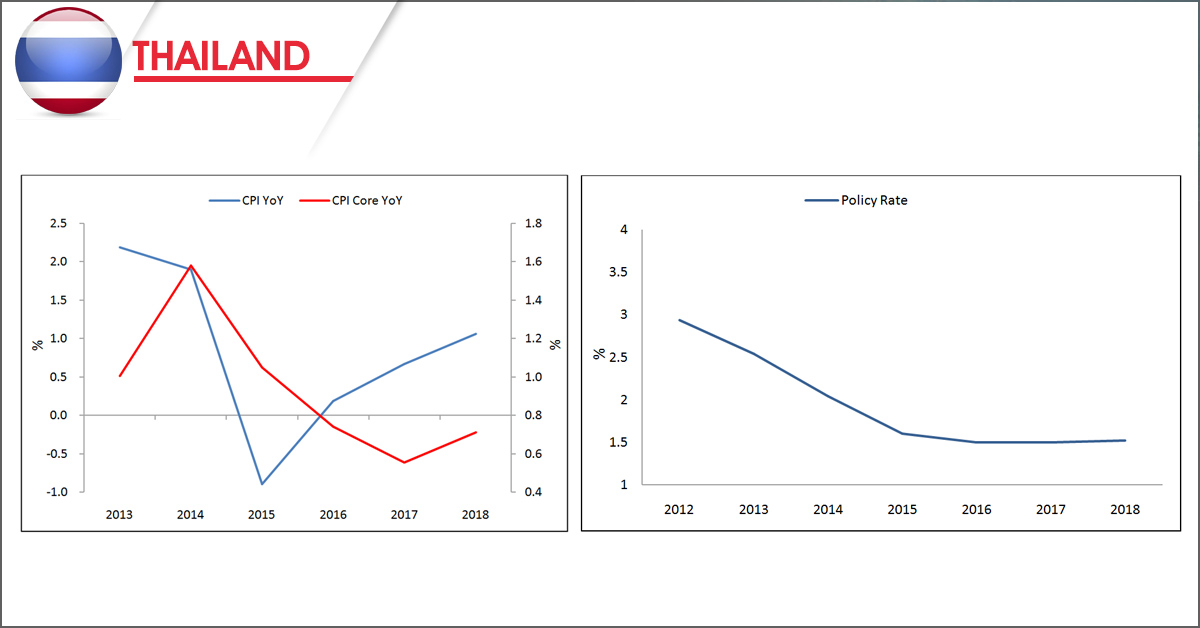 Under this framework the monetary policy committee agreed to maintain inflation target at 0.5% to 3.0% in each year from 2010 to 2014. It was expected that low and stable inflation would enable economic growth on a sustainable path in the long run, maintain country’s export price competitiveness and instill business and consumer confidences. In 2013, inflation was at 2.2% while core inflation was at 1.0%. Since 2014, the central bank has been revising its inflation target to capture deficiencies in core inflation, which was a proving deterrent to its effectiveness going forward. The medium-term inflation target in 2017-18 was at 2.5% +/- 1.5%. This level was considered conducive to supporting the economy. Interestingly, in 2017-18 inflation was maintained much below the target level at 0.7% and 1.1% respectively. Complimenting it, core inflation came in at 0.6% and 0.7% respectively. Monetary policy of the Central Bank had moved to “ease”, lowering from 2.5% in 2013 to 1.5% in 2018. This accommodative monetary policy stance is in line and is considered appropriate to monitor developments of economic growth, inflation, financial stability together with associated risks and challenges. 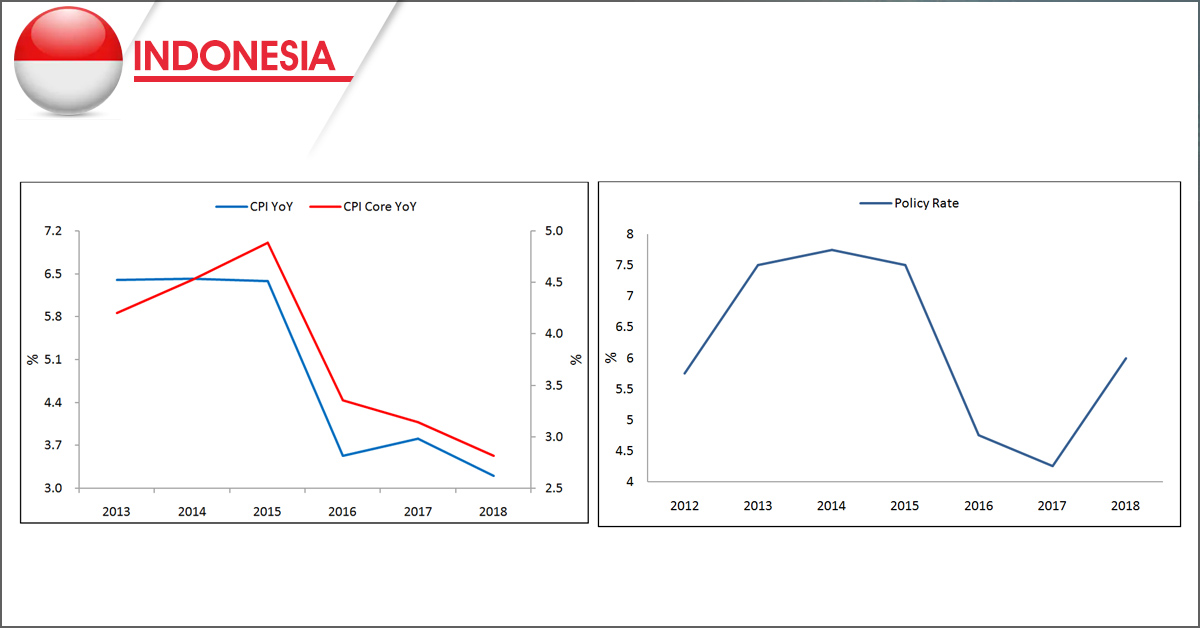 One of the primary objectives of Bank Indonesia is to maintain stability of its currency, rupiah along with inflation consistency. Under this objective the Bank has been raising its benchmark interest rate over the last few years with an aim to strengthen its currency. Previously in 2013 the Bank has been battling accelerating inflation and weak currency by raising interest rates by 50 basis points at once. Such aggressive steps for the next two years had proved beneficial. Combating inflation and maintaining normalcy in other domestic fundamentals, the Bank slashed its policy rate in 2015 by 25 basis points for the first time since 2011. This decision was expected to contain inflation at the lower end of the Central Bank’s range for the year. 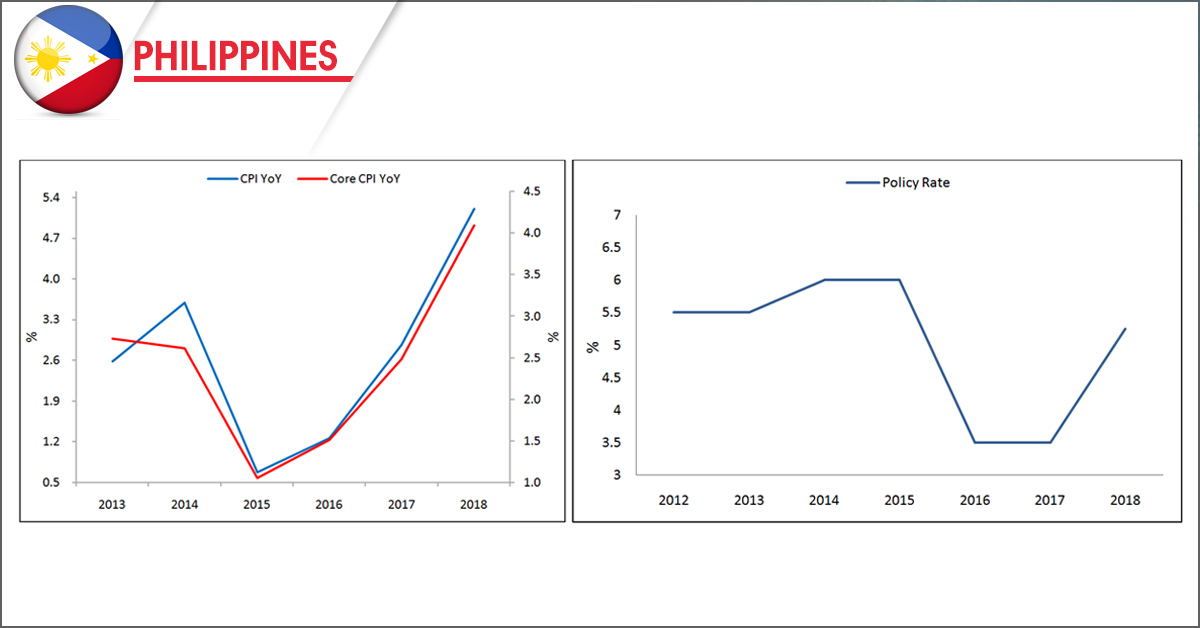 Bangko Sentralng Pilipinas (BSP) has adopted inflation targeting as a framework for monetary policy in 2002 and is measured through consumer price index (CPI). Currently the Bank’s inflation target is at 3.0%+/-1%. Previously from 2014 to 2016, the Bank had set its target range at 4%+/-1% and 3%+/-1%. We find that 2014 inflation rate was at 3.6% while core inflation was at 2.6%. However, inflation in 2018 rose significantly to 5.2% from 2.9% in 2017. 2018 witnessed inflation breaching its target range. Subsequently, core inflation was also on the higher side at 4.1%. The rise in inflation in 2018 was mainly driven by domestic factors. In a proactive action to help temper the rise in inflation the Central Bank raised its policy interest rates to 5.25% in 2018. This policy decision brought the total increase in benchmark rates to 175 basis points in that year to curb rising inflationary pressures. The last time a major policy rate movement was observed in 2016 when the bank slashed rates by hundred basis points to 3% as it shifted to a different interest rate system which was seen as an operational adjustment and not an easing of monetary policy.