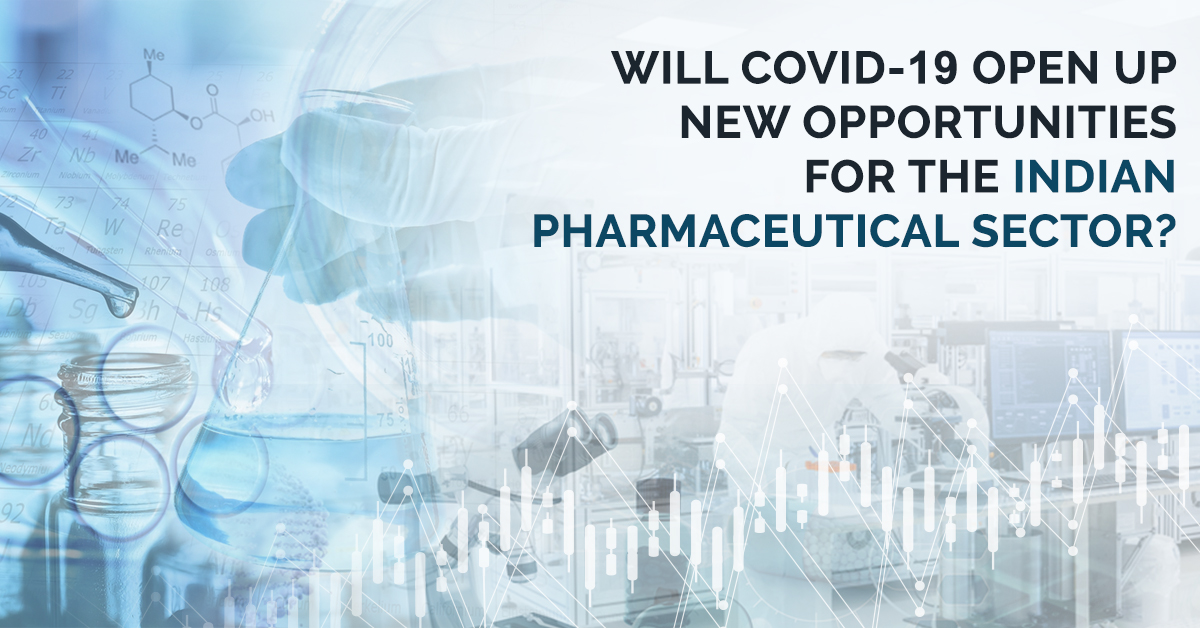 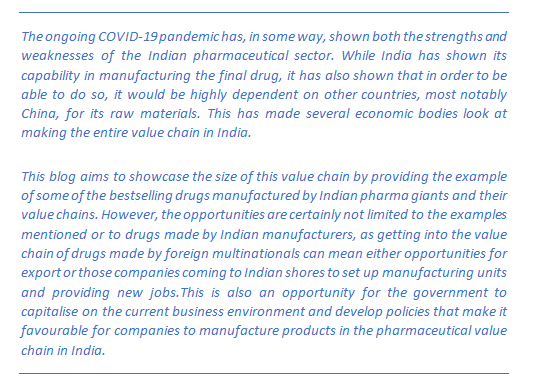 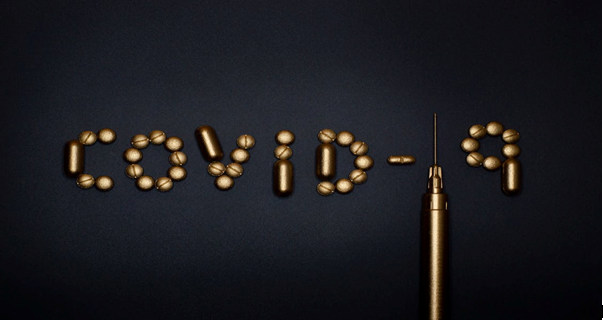 The ongoing COVID-19 pandemic has shown the Indian pharmaceutical sector in good light recently, while at the same time, it has significantly exposed the frailties of the sector. Currently, the Indian pharmaceutical sector is in the news for good reasons as it is able to export millions of doses of hydroxychloroquine, an antimalarial which, while not conclusively tested to be able to cure the coronavirus, has had some cases of making patients recover to countries like the United States and Brazil. However, the initial outbreak of the disease in China was a crisis for this very sector, as 70% of the active pharmaceutical ingredient (API) requirement was met by imports from China2 and as supplies for APIs, which is the principal raw material for drug manufacturers stopped, there were worries about how long can the pharmaceutical sector produce at maximum capacity.

Due to this challenge that the sector faced during this crisis, various economic bodies in the country such as the NITI Aayog have mentioned that this needs to be addressed and a new policy must ensure that the manufacturing of APIs and pharmaceutical intermediates within the country should be promoted. The NITI Aayog CEO Amitabh Kant has met representatives of pharmaceutical companies to discuss reducing API dependency on China3, and according to the national president of the Bulk Drug Manufacturers’ Association, the government is looking to build API parks3. While this is an obvious opportunity for pharmaceutical companies to backward integrate and start producing APIs and intermediates, it also provides companies in other sectors such as speciality chemicals to enter this sector. For these players to enter, it would be necessary to know the numerous manufacturing steps that convert a naturally-found product into a tablet.

What is a Drug? 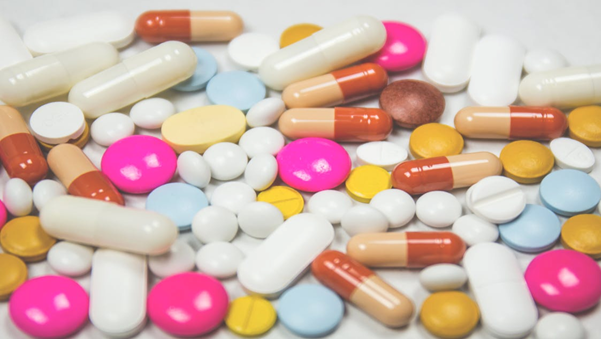 In pharmacological terms, the definition of a drug would be a chemical substance of known composition which evokes a biological effect when administered into a living organism5. In case of a pharmaceutical drug, that biological response would be to treat, cure or prevent a disease or alleviate the symptoms.

The major component of a drug would be the active pharmaceutical ingredient (API). This is the biologically active compound that acts on the body to produce the desired response. In some cases, a drug would have multiple APIs, such as the combination of amoxicillin and potassium clavulanate which forms a more efficient antibiotic than just amoxicillin and is sold under the trade name Augmentin6.

However, the API is not the only component of a drug. A drug also contains various other components called excipients which play other roles. There are various kinds of excipients7. Vehicles, for example, help the active ingredient reach the site of action when it cannot do so for any reason whatsoever. Binders help the different components bind while disintegrants cause the tablet to break apart under specific conditions, such as the extremely acidic conditions in the stomach. Flavours, sweeteners and coatings make the drug more palatable, with the latter causing the added benefit of protection of ingredients from moisture in the air, while colours improve the tablet’s appearance. Enterics control the rate at which the active ingredient is released. Depending on the mode of administration and nature of the disease, some of these excipients are combined with the API to form a dosage.

The raw material that starts the value chain would be a compound extracted from a natural source. The earliest drugs as we would know it would often comprise of such compounds. Examples would include penicillin which is produced by moulds of various fungi of the genus Penicillium and quinine which can be extracted from the bark of the cinchona tree. However, today’s APIs are mostly produced by performing further reactions on a naturally-occurring compound to produce a more efficient compound.

The conversion to API from a naturally-occurring compound is a process that make require one or more steps. If it requires more than one step, then the product of every step apart from the final step that becomes the reactant in the following step is called an intermediate. In some cases, an intermediate can be a compound that is already synthesised in industrial quantities for other uses. For example, the anti-inflammatory drug ibuprofen was first synthesised from propionic acid8 which, while available in small quantities from natural sources, was available in large quantities through the reaction with ethylene as it is commonly used as a preservative9. The final step would see the conversion of the final intermediate into the API.

In making the final drug, it has to be ensured that every dosage, such as a tablet, should have the correct composition and the exact amount of the API. In case of tablets, this is done by making a homogenous mix of ingredients through blending and granulation10. The tablet is then made using powder compaction and are subsequently coated with a suitable coating10. In case of capsules, the powder containing the API and other excipients is encapsulated in gelatine or hypromellose11. 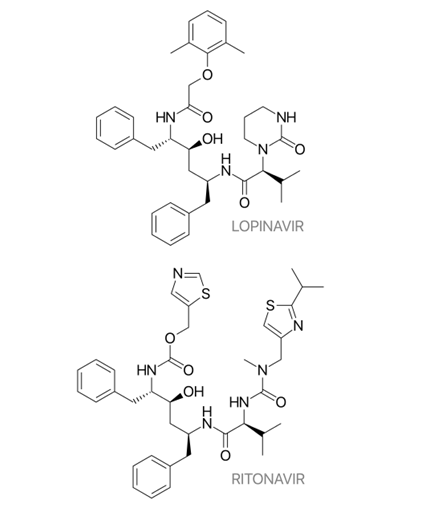 Lopinavir is an antiretroviral that is used in the treatment of HIV/AIDS. It works as a protease inhibitor. It is often used in combination with a low dose of ritonavir, another protease inhibitor and this combination is present in the World Health Organisation’s List of Essential Medicines20. Recently, this combination drug also made the news as Yusuf Khwaja Hamied, the Chairman of Cipla, is repurposing this drug to combat coronavirus21. While there are no available reports with quantitative data on lopinavir’s market size, it is safe to say that the market size will grow at a tremendous rate if it does turn out to be effective against coronavirus.

There are various resources available online which mention how lopinavir is synthesised. One of them mentions how lopinavir was developed in multiple steps using the readily available amino acid L-valine as a starting material22. Production of lopinavir compound or any of the intermediates in the process which is considered the most efficient is extremely valuable as there are plenty of buyers looking to buy it to complete the remaining steps.

Ever since it was approved for medical use in the United States in 1996, atorvastatin has been one of the biggest selling drugs in the world23. One of several statins, it is used to prevent cardiovascular disease and treat dyslipidaemia, or an abnormal amount of lipids in the blood. In 2017, this was the second most prescribed drug in the United States, with the number of prescriptions exceeding 104 million23. Sales of atorvastatin from 1996 to 2012 exceed $125 billion23, making it one of the best-selling drugs of all time. The atorvastatin API market is expected to reach $425 million in 202324. While currently United States is the market leader primarily because it is the country with the maximum demand for atorvastatin, the demand for this drug will increase in other parts of the world including developing countries due to the increased sedentary lifestyle in these places.

There are various routes possible for the synthesis of atorvastatin. One of them, which was mentioned in a research paper, uses readily available 3-fluorobenzaldehyde, isobutyric acid, an amine and an isocyanide as starting materials. The commercial method, as used by Pfizer, uses the Paal-Knorr reaction. Production of the final atorvastatin molecule or the intermediates for any of these routes or any other route which is considered the most efficient is valuable as buyers would look to use this to complete the remaining steps.

Opportunities in the Indian pharmaceutical sector with respect to active pharmaceutical ingredients (APIs) and intermediate compounds were looked at by taking the example of three highly profitable drugs and their value chains. The opportunities are certainly not limited to the examples mentioned above, and this would allow anyone looking to enter this space aspire to make a plethora of APIs and intermediates that can be used to make drugs that perform different actions on the human body.

Many companies in the speciality chemicals sector and other chemicals sectors already have the experience in synthesising large amounts of organic compounds. With a little expansion of their knowledge bank, they can enter this exciting space with assured customers in the form of drug manufacturers. This will not only help pharmaceutical production in India be protected from factors happening in other countries, but also provide many manufacturing jobs to Indian people and bring prosperity to the country.

Many drug manufacturers are also in the API production business, but the amount of API they produce is not enough to match its drug production capacity and therefore, in the current scenario, they are forced to import from countries like China. Backward integrating into the API business and further increasing the capacity of the APIs for the drugs that they are already manufacturing would be a major risk minimising tool for these pharmaceutical companies and help them maintain consistent level of production.

Given this current business environment, it is imperative that the government grabs this opportunity with both hands and helps make India the new global API and intermediates hub. It has been reported that India’s API industry was ahead of China in the 1990s, but thanks to the latter providing various benefits such as free land, cheap utilities such as water and power, and negligible financing costs, China took the lead and soon became the global leader in APIs, thereby making Indian pharmaceutical companies dependent on Chinese API manufacturers for raw material3. In order to make India the new global API hub, the API and intermediate parks will have to be set up where companies get benefits when it comes to utilities and financing. Many companies in the chemical sector are unwilling to enter this space due to the large number of regulations in the pharmaceutical sector and lack of knowledge. The government will have to ease regulations and make it easy for companies to set up an API or intermediate manufacturing plant. To address the latter problem, an economic body like the NITI Aayog can help start conversations between Indian pharmaceutical companies and chemical companies, where chemical companies can identify how their capabilities can help them enter this exciting sector.

For the examples, the processes described were taken from various chemistry websites and research articles that have been referred below. This blog does not definitively mention which process is the most feasible both financially and chemically, or which process is used by industrial players today for the synthesis of intermediates and APIs. This blog does not vouch for the chemical and financial feasibility of the processes explained, and separate research would have to be undertaken to identify what is the most efficient and profitable route to synthesise a given compound. 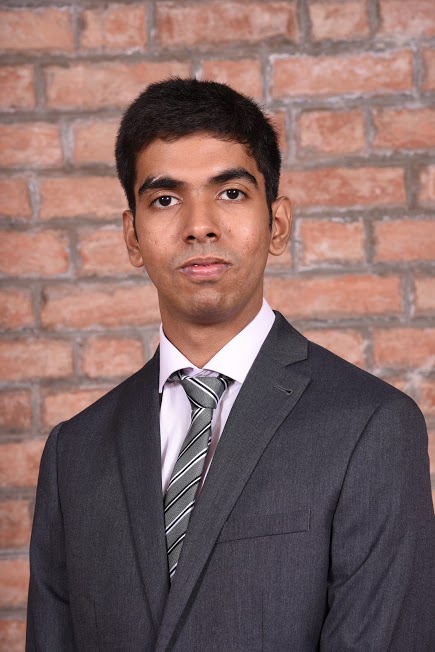 About Intueri: Intueri Consulting is a management consulting firm with nearly 100 man-years of experience in managing organizational challenges, including managing firms and clients through some of history’s biggest crisis periods such as the 1997 Asian Financial Crisis, 9/11 led crisis, 2007-08 global financial crisis. This vast repository of organizational management experience, accrued by senior management, over decades of managing large multinational firms and clients enables Intueri to develop effective, efficient crisis management strategies and provides it with a unique perspective into events and decisions that take into consideration all important aspects of a firm, including assessment of primary, secondary and even tertiary order potential effects on the firm on account of implementation of strategies. Intueri has been helping organisations enter new areas within the chemical sector in order to diversify their product mix with the help of existing players who are looking to buy something they need or to sell something that they make. The firm has consultants with extensive domain knowledge both in the chemical and pharmaceutical sector.